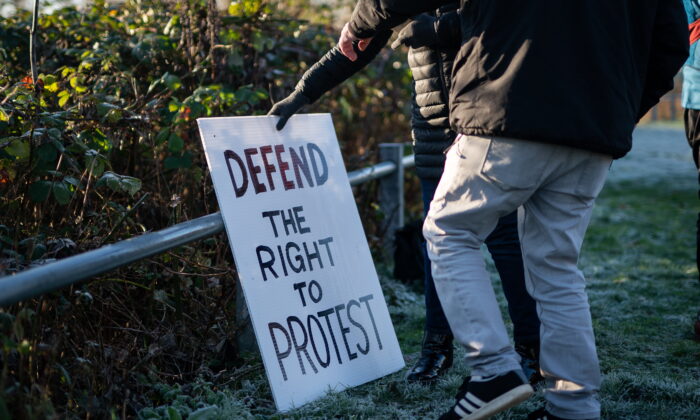 The UK government on Monday suffered 14 defeats as the House of Lords voted against a raft of proposed measures in the Police, Crime, Sentencing, and Courts Bill.

The controversial measures were inserted into the bill to target eco-activist groups such as Extinction Rebellion (XR) and Insulate Britain, whose members use tactics such as blocking traffic on busy roads and motorways, and gluing or locking themselves on roads and other infrastructures.

But peers from the opposition parties criticised the proposals that they said are “draconian” and would give the police “sweeping, significant, and further controversial powers” that are “a wider assault on our democracy.”

New powers turned down by the peers included allowing police officers to stop and search anyone at a protest “without suspicion” for “locking-on” devices that can prevent the police from removing traffic-disrupting protesters.

A move that would allow individuals with a history of causing serious disruption to be banned by the courts from attending certain protests was also dismissed, along with a proposal to make it an offence for a person to disrupt the operation of key national infrastructure, including airports and newspaper printers.

In a separate defeat, peers backed restricting the imposition of tougher sentences for blocking a highway to major routes and motorways rather than all roads.

The peers earlier had also defeated other contentious curbs on demonstrations proposed in the legislation, including powers to impose conditions on protests judged to be too noisy—a proposal inserted in response to disruptive protests by XR and Black Lives Matter activists.

Arguing for the necessity of the proposed measures, Home Office minister Baroness Susan Williams argued they were “vitally important in protecting the country from the highly disruptive tactics employed by a small number of people.”

Williams told the peers that the government “will not shrink” from defending the rights to freedom of speech and assembly, but “must also defend the rights and freedom of the law-abiding majority,” whose rights “cannot and must not be trampled on by a small minority of protesters, who believe they should not be answerable to the law and should be given carte blanche to cause any amount of disruption at any cost.”

However, Crossbench peer Lord David Philip Pannick GC argued that the measures could be counterproductive.

Green Party peer Baroness Jenny Jones called the measures “draconian laws that are a wider assault on our democracy,” while Crossbench peer Lord Alex Carlile said the “dilution of without-suspicion stop and search powers is a menacing and dangerous measure.”

Other peers hit out at the way the measures were inserted.

“If the government is determined to bring in these draconian, anti-democratic laws, reminiscent of Cold War eastern bloc police states, they should withdraw them now and introduce them as a separate Bill to allow the democratically elected House time to properly consider them,” said Liberal Democrat Lord Brian Paddick, who was a deputy assistant commissioner in the Metropolitan Police.

Labour frontbencher Lord Richard Rosser said the “sweeping, significant and further controversial powers” had not been considered by the elected House of Commons and branded it an “outrageous way to legislate.”

“We cannot support any of these last-minute, rushed, and ill-thought-through broad powers … with the exception of approving the increased sentences for wilfully obstructing motorways and major roads,” he said.

Responding to the peers’ criticisms, William argued that passing the measures would “send a signal to the militants who believe that their right to protest trumps all other rights and there should be no limit on the amount of disruption they cause whatever the cost to the wider public.”

The peers’ mauling of the Tory government’s plans sets the stage for a protracted parliamentary tussle known as ping-pong, where legislation passes between the Lords and the Commons until an agreement can be reached. But it’s customary for the ping-pong process to stop after three rounds.