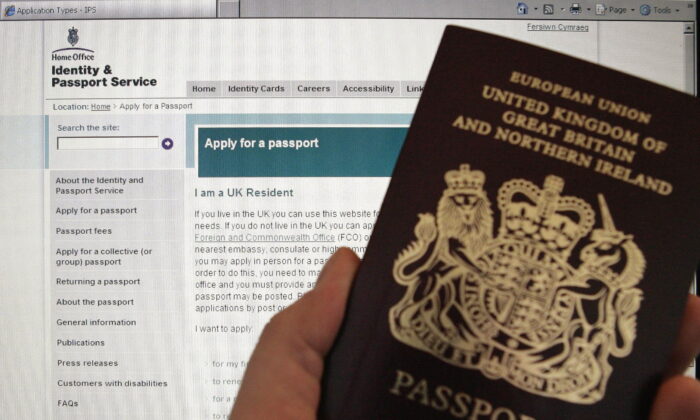 A British passport in front of a screen displaying the UK Home Office's website, in an undated file photo. (PA)
UK

UK Passport Office in Firing Line as Delays Mount Up

A British government minister has urged people to renew their outdated passports “as soon as possible” if they hope to go on holiday this summer as the Passport Office faces a 10-week backlog in processing applications.

With the tourist industry returning to a state of near normality after the lockdown-wrecked summers of 2020 and 2021, there has been an unprecedented number of applications by British citizens who realised their passports were out of date.

Home Office minister Kevin Foster told the House of Commons on April 25 that a million passports were processed last month compared to 7 million a year in 2019.

But Stephanie Peacock, a Labour MP, told the House of Commons a woman in her Yorkshire constituency had applied in January for a new passport for her daughter, intending to go on holiday next week, but had still not received it back.

Home Secretary Priti Patel replied, “That’s a very, very unusual delay, there must be a problem.”

Heathrow Airport CEO John Holland-Kaye said it was “vital” people were able to get away for a summer holiday.

Holland-Kaye said it was “really disappointing” to hear of delays. “If it’s not resolved, it is going to mean that people can’t get away,” he said.

“After two years of lockdown, we need to make sure people can have a good holiday because many of them have vouchers that they’ve been saving up, they’ve got trips of a lifetime that they’ve put on hold, and we don’t know when things might get closed down again. Making the most of the summer is vital,” he added.

The MP for North Dorset said: “Certainly my constituents are telling me their experience is either really very good or it is an absolute shambles … Something needs to be done to arrest this, and quickly.”

The Passport Office is part of the Home Office and employs 3,000 people in London as well as regional offices in Peterborough, Liverpool, Durham, Glasgow, Belfast, and Newport in Wales.

Earlier this month the Director General of the Passport Office, Abi Tierney, said, “Our dedicated staff are working tirelessly to ensure that passport applications are processed as quickly as possible.”

In 2014 the then-Home Secretary Theresa May brought the Passport Office under direct government control and replaced the chief executive after a backlog in passport applications built up.