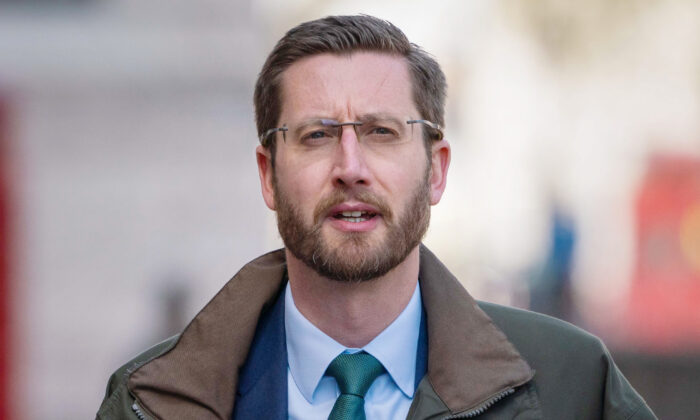 UK Partygate Investigation Lead Steps Back After Being Accused of Partying

The Cabinet Secretary appointed to investigate alleged parties in Downing Street and the Department for Education during lockdown last year has recused himself after he was accused of hosting a Christmas party at around the same time.

Simon Case quit his role leading the inquiry on Friday after it emerged a quiz was held in his own department that he was aware of and spoke at “to ensure the ongoing investigation retains public confidence.”

“To ensure the ongoing investigation retains public confidence the Cabinet Secretary has recused himself for the remainder of the process,” a Downing Street spokesman said in a statement.

“The work will be concluded by Sue Gray, second permanent secretary at the Department for Levelling Up, Housing, and Communities,” he said.

“She will ascertain the facts and present her findings to the Prime Minister.”

Case’s credibility to lead the inquiry was questioned after the Guido Fawkes website reported on Friday that two Christmas parties were held in Case’s department, the Cabinet Office, in December 2020, when restrictions were in place.

The website said one event last December “saw staff drinking in Case’s office before departing for drinks elsewhere,” and another event, in which Case “wasn’t actively participating,” but allegedly stuck his head into the room to call staff out to talk, took place on Dec. 17, one day before the alleged party in Downing Street.

The Times reported that the Dec. 17 event was listed in digital calendars as “Christmas party!” and was organised by a private secretary in Case’s team.

Cabinet Office on Friday evening said the alleged party was a virtual quiz.

“Staff in the Cabinet Secretary’s private office took part in a virtual quiz on Dec. 17, 2020,” a spokesperson said.

“A small number of them, who had been working in the office throughout the pandemic and on duty that day, took part from their desks, while the rest of the team were virtual.

The spokesperson said the event in the office lasted for an hour, with drinks and snacks “bought by those attending,” and Case had “played no part in the event, but walked through the team’s office on the way to his own office.”

“No outside guests or other staff were invited or present,” the spokesperson said, adding Case “also spoke briefly to staff in the office before leaving.”

Labour deputy leader Angela Rayner said that public trust has taken a “very big dent” and it’s up to Gray to restore that.

“This is now a question of whether or not this government can act in a way that restores public trust, and I think that’s took [sic] a very big dent, we saw that with the by-election results,” Rayner told broadcasters, referring to the by-election in North Shropshire on Thursday, when the Conservative Party lost the seat it held for almost 200 years.

“And I do think now that [Prime Minister] Boris Johnson has completely undermined his position,” Rayner added.

Johnson has suffered a month of negative press since the Tory government was accused of “corruption” and “wallowing in sleaze” after it attempted unsuccessfully to save then-MP Owen Paterson by trying to revise the disciplinary procedures for MPs.

More lurid headlines followed soon afterward, with Johnson facing an investigation over alleged partying in Downing Street during the lockdown and struggling to fend off allegations of lying about how the refurbishment of his Downing Street flat was funded.

The prime minister’s authority was further dented on Tuesday when 96 Conservative MPs—almost one-third—defied his leadership to vote against the introduction of mandatory COVID health passes for entry to large venues—the biggest rebellion since he entered Number 10.

After the North Shropshire, Johnson said the result was “very disappointing” and he takes “personal responsibility” for the loss.