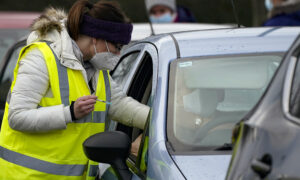 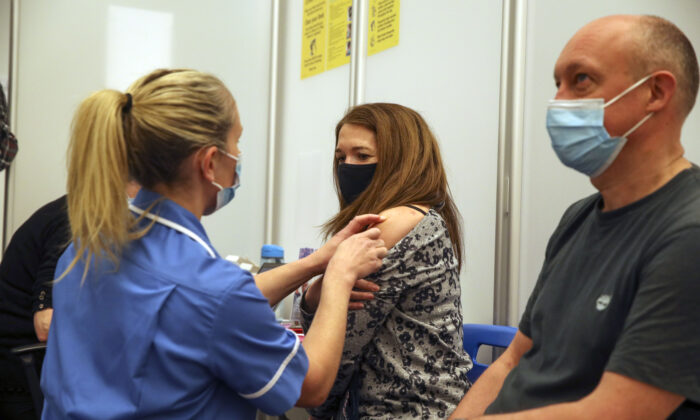 Caroline Nicolls receives an injection of the Moderna COVID-19 vaccine administered by nurse Amy Nash, as she sits next to her husband Mark Nicolls who is waiting for his vaccine at the Madejski Stadium in Reading, England, on Apr. 13, 2021. (Steve Parsons - WPA Pool/Getty Images)
UK

UK Offers COVID-19 Vaccines to People 45 or Over

People aged 45 or over can now book COVID-19 vaccines, the UK government announced on Tuesday.

“I can announce formally, that from today we have opened up invitations to get a vaccine to all aged over 45, and then we will proceed to everyone aged over 40 in line with supplies,” Health Secretary Matt Hancock said in the House of Commons.

NEWS: All over-45s can now come forward to get their COVID-19 jab.

We’re making great strides in protecting our country from this virus thanks to the hard work of the team & the British public 🇬🇧 pic.twitter.com/mdGJA1X0bB

Everybody in the government’s top nine priority groups—those aged 50 and over, the clinically vulnerable, and health and social care workers—has been offered a vaccine, the Department of Health and Social Care (DHSC) said.

“We’ve now delivered a first dose to over 32 million people, and are on track to offer a vaccine to all adults by the end of July,” Hancock said.

He said the vaccination programme “has saved over 10,000 lives” and has allowed the government to lift lockdown restrictions across the country.

The UK’s medicines regulator, the Medicines and Healthcare products Regulatory Agency (MHRA), has so far approved three COVID-19 vaccines—the Pfizer/BioNTech, the Oxford/AstraZeneca, and the Moderna jabs.

The regulator is conducting rolling reviews to assess the vaccine candidates produced by Janssen and Novavax.

The UK rollout of the Moderna vaccine began in Wales on April 7 and has now expanded to England, Hancock said.

There have been concerns that some variants of the CCP (Chinese Communist Party) virus, such as those first identified in South Africa and Brazil, may be more resistant to antibodies than the old variant and reduce the effectiveness of vaccines.

The DHSC said on Monday that it was carrying out the UK’s “largest surge testing operation” so far to curb the spread of the South African variant in parts of South London.

A cluster of cases of the mutant virus have been identified since early March, mainly in the boroughs of Wandsworth and Lambeth. To date, 44 confirmed cases and 30 probable cases have been found.

There have been some reports of adverse effects after vaccination. MHRA said on April 7 that 19 people had died in the UK after developing rare blood clots following vaccination with the AstraZeneca jab.

On the same day, the European Medicines Agency, the European Union’s drug regulation agency, said there is a “possible link” between the AstraZeneca vaccine and “very rare” blood clots.

But both the UK and the EU regulators insisted that the benefits of vaccination outweigh any risks.