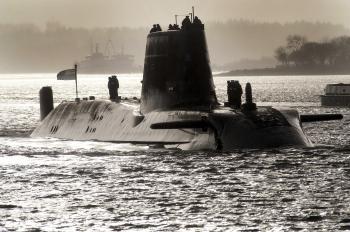 HMS Astute sails up Gareloch on the Firth of Cylde to her base in western Scotland on Nov. 20, 2009. (Andy Buchanan/AFP/Getty Images)
Europe

Nuclear Sub HMS Astute Runs Aground at Isle of Skye

"Astute ran aground by her … stern earlier this morning as she was transferring people ashore," a Royal Navy spokesman told the U.K.'s Daily Telegraph.

The British Defense Ministry confirmed that the Astute, which is nuclear-powered but not nuclear-armed, “got into difficulty”

A Ministry of Defense spokesman told The Scotsman: "We are aware of an incident involving one of our submarines off the Isle of Skye. This is a not a nuclear incident.

"We are responding to the incident and can confirm that there are no injuries to personnel and the submarine remains watertight. There is no indication of any environmental impact."

Eye-witness Ross McKerlich told the BBC that the submarine ran aground about a mile from his home.

"When I woke up this morning and looked out my bedroom window I could see the submarine," he said. "I am very surprised how far in it has come as there are good navigational buoys there."

The incident occurred around 8:19 a.m. local time, according to the BBC.

The 97-meter (323-foot), 7,800 tonne Astute, launched in 2007, was designed to find and sink enemy submarines. The Astute is armed with Spearfish Torpedoes and Tomahawk cruise missiles.

The Royal Navy’s website calls the Astute “the Navy’s best,” and “largest and most powerful nuclear attack submarines ever built for the Royal Navy, equipped with the world’s most advanced sonar system.”

In September this year, Scotland's Daily Record reported Astute had caused a traffic jam on the bridge joining the mainland to the Isle of Skye.

While motionless in the water by Kyle of Lochalsh, the sub became a focus of many commuters travelling from the mainland.

The first of a new class of nuclear submarine, the profile of HMS Astute is "more like one of her Russian counterparts than anything Britain has owned before".

Commissioned into the fleet in August, it is said to be the most advanced submarine in the world and "more complex than the space shuttle".

However, its unexpected distraction caused the local authorities, after consultation navel authotities, to move the boat on.

Astute's captain, Commander Andy Coles said: "The crew have had to learn this boat from scratch. We're rewriting the book every day."