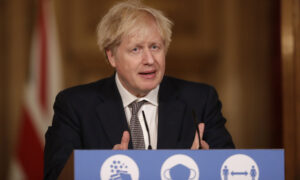 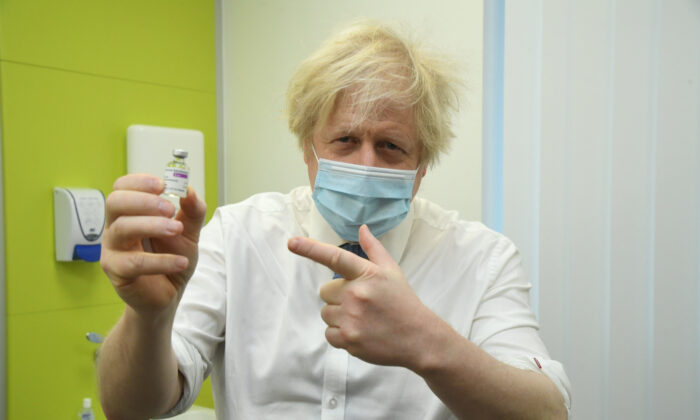 Britain's Prime Minister Boris Johnson poses with a vial of AstraZeneca/Oxford COVID-19 vaccine during a visit to a coronavirus vaccination hub at the Health and Wellbeing Centre in Orpington, southeast London, on Feb. 15, 2021. (Jeremy Selwyn /POOL/AFP via Getty Images)
UK

British Prime Minister Boris Johnson on Feb. 15 refused to set firm dates for easing COVID-19 lockdown measures, arguing instead that a “cautious but irreversible” plan would be preferable.

Johnson, who is due to reveal his plan for exiting lockdown on Feb. 22, has come under pressure from lawmakers and businesses to set clear dates for the lifting of CCP (Chinese Communist Party) virus restrictions following the biggest vaccine rollout in British history.

“If we possibly can, we’ll be setting out dates,” he told reporters during a visit to a health centre in London.

But he said the dates the government will be setting out will be “the target date by which we hope to do something at the earliest.”

“If, because of the rate of infection, we have to push something off a little bit to the right, delay it for a little bit, we won’t hesitate to do that,” he said.

“I think people would much rather see a plan that was cautious but irreversible, and one that proceeds sensibly in accordance with where we are with the disease.”

The government announced on Sunday that 15 million people across the UK had received the first dose of a COVID-19 vaccine.

The COVID Recovery Group (CRG), a group of Tory MPs who are sceptical about lockdown measures, said that they welcomed “the tremendous pace of the vaccination rollout” and that the restrictions will no longer be justified once the high-risk groups have been protected by COVID-19 vaccines.

In a letter to the prime minister, they demanded that schools must be reopened to all pupils on March 8 and all CCP virus restrictions must be lifted by the end of April.

Johnson said the government sees it as a priority to reopen schools on March 8, and “we will do everything we can to make that happen.”

But he said “we’ve got to be very prudent” as the deaths and rates of infection remain “very high” and some 23,000 COVID-19 patients remain in hospital, more than at the April peak last year.

Asked if the government has plans to issue “vaccine passports,” Johnson said: “I think inevitably there will be great interest in ideas like—can you show that you’ve had a vaccination against COVID—in the way that you sometimes have to show that you’ve had a vaccination against yellow fever or other diseases in order to travel somewhere. I think that’s going to be very much in the mix down the road.”

But he said he does not think the UK would adopt “vaccination passports to allow you to go to, say, the pub or something like that.”