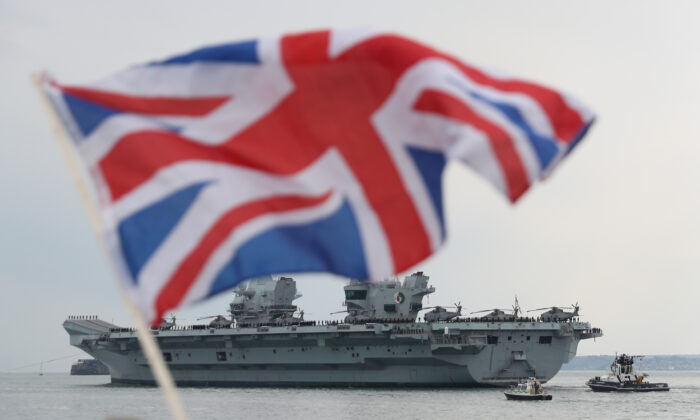 The Royal Navy aircraft carrier HMS Queen Elizabeth leaves Portsmouth Naval Base in Hampshire for exercises off Scotland before heading to the Indo–Pacific region on May 1, 2021. (PA)
UK

Britain must build a bigger and more advanced navy to protect the country in an “increasingly hostile and unpredictable international environment,” a cross-party group of lawmakers has warned.

On Tuesday, the Defence Committee of the House of Commons published its latest report entitled “We’re going to need a bigger Navy.”

The report finds that the next decade is “one of significant risk” for the Royal Navy’s fleet, with “the rise of more assertive state adversaries, grey zone warfare, and technological risk.”

“Over the next decade the UK and the Navy will face an increasingly complex international security environment,” the report said, adding, “Russia and China will remain the primary adversaries at sea, with the relative importance of the UK’s response to each likely to shift and potentially interact through the decade.”

In its inquiry into the Royal Navy’s purpose and procurement, the Defence Committee said, “Witnesses have consistently identified Russia and China as the main adversaries in the maritime domain (as well as elsewhere).”

While it has been argued “the foremost threat is clearly the pacing threat posed by Russia,” some witnesses, such as Sidharth Kaushal of the Royal United Services Institute (RUSI), warned that “in a 10-year timeframe China could overtake Russia to become the primary challenge.”

Rob Johnson, director of the Oxford Changing Character of War Centre, predicted that the next decade will be crucial to how the UK responds to the Chinese regime.

“Even those witnesses who were sceptical of the effect the UK could have on security in the Indo–Pacific agreed that the challenge China posed to UK interests was growing,” the report said.

Tobias Ellwood, a Conservative MP who chairs the Defence Committee, criticised the government for “reducing funding, retiring capability, and asking the navy to rely on increasingly elderly vessels,” and said “a rapid programme of modernisation and growth” is needed.

He said, “Overall our navy needs more ships, armed with more lethal weapons and the most up to date technology.”

The report warned that in its current state, the navy would not be able to meet the aim’s of the government’s foreign policy shift in the Integrated Review released earlier this year, in which it has a “potentially leading role.”

Ellwood said: “Of all the services, the government is most ambitious for the navy. However, if the government does not deliver the ships and capabilities the navy needs, that ambition will be holed below the waterline.”