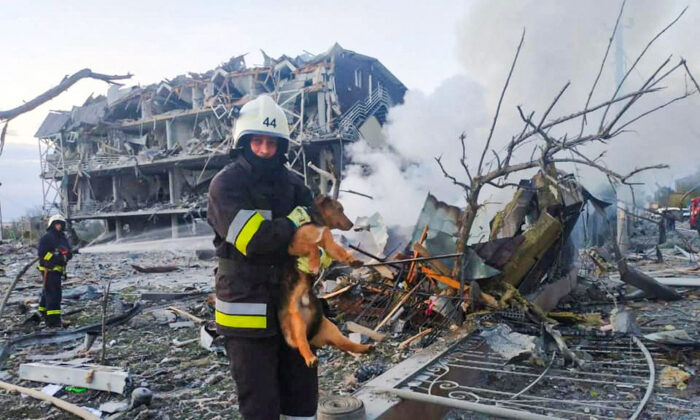 Emergency personnel work near a building damaged after a military strike, in Odesa, Ukraine, in this handout image released May 9, 2022. (State Emergency Service of Ukraine/Handout via Reuters)
UK

UK Must Be Prepared for Ukraine War to Last ‘A Very Long Time’: Minister

The war in Ukraine may last a “very long time” and the UK must be prepared for that, a British defence minister has said.

Parliamentary Under-Secretary of State for Defence People and Veterans Leo Docherty made the comment in the House of Commons on May 11 after Conservative MP James Sunderland asked him about “policy resilience.”

Sunderland asked the minister how long the UK’s current level of support for Ukraine will continue “if the conflict goes from months into years, becomes an attritional campaign.”

Docherty replied: “We have all been clear that our support to Ukraine is something I expect to last many years. We have had a very close defence relationship since 2014.”

He said the war is moving into an “attritional” phase and will continue “at tragic and significant cost of the Russian state.”

“We can’t speculate on how long it might last but I think we must be prepared for it to last for a very, very long time,” he said.

He added that the UK “should be reassured” by the fact that Britain and its allies across western Europe “have the resolve to see this through.”

The defence minister appeared in the House of Commons to answer an urgent question from the main opposition Labour Party, which accused the Conservative government of leaving a “defence-shaped black hole” in its legislative agenda announced in the Queen’s Speech on May 10.

In response, Docherty said the Ukrainian armed forces were seeing a “wholesale institutional reinvigoration” thanks to military aid from the UK.

On the cuts to the UK armed forces, the minister said that “thanks to the £24 billion ($30 billion) uplift in defence spending, we are in good shape and we are a good size.”

He reiterated commitments to send 300 more missiles, armoured fighting vehicles, and other support including “anti-ship systems,” as well as further humanitarian aid.

On May 7, the UK government pledged £1.3 billion ($1.6 billion) worth of further military support to Ukraine to sustain the country’s continuing resistance to the Russian invasion.

Prime Minister Boris Johnson said the UK was “the first country to recognise the scale of the threat and send arms to help the Ukrainians defend themselves.”

“We will stand by that endeavour, working with our allies to ensure Ukraine can continue to push back the Russian invasion, and survive as a free and democratic country,” he said.