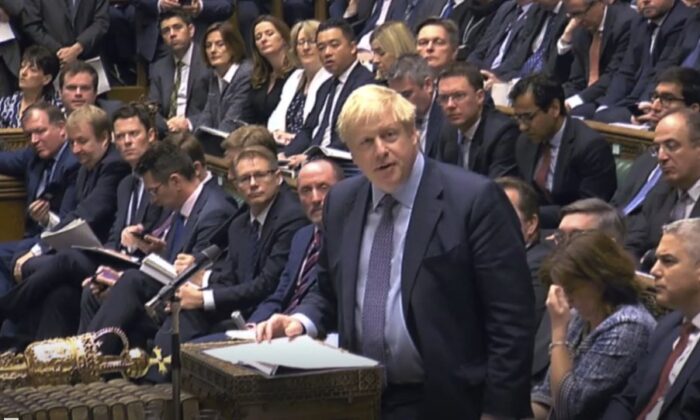 Britain's Prime Minister Boris Johnson delivers a statement to lawmakers inside the House of Commons to update details of his new Brexit deal with EU, in London on Oct. 19, 2019. (House of Commons via AP)
UK

UK MP Pushes for Rights for All Hongkongers to British Passports

‘The UK has a moral obligation to act’ Amidst Beijing’s Crushing of Hong Kong’s Autonomy: British MP
By Ella Kietlinska
Print

British Member of Parliament Alistair Carmichael called on the government on June 2 to reopen the British National (Overseas) passport program to the people of Hong Kong, saying the UK must provide them with a path to British citizenship or permanent residence.

Carmichael (Liberal Democratic Party) introduced in February the cross-party Hong Kong Bill that would reopen the British National (Overseas) or BNO passport offer to all Hong Kongers and give them the right to live in the UK.

“Relatively few people have a BNO Passport as the scheme was closed years ago,” Carmichael said.

“This is a naked power-grab by Beijing, running roughshod over the rights of the people of Hong Kong. We cannot sit back & watch this violation of rights & freedoms,” Carmichael justified his bill referring to the bill recently passed by the Chinese Communist rubber-stamp legislature to enact the “national security law” in Hong Kong.

Extending the stay for BNO passport holders to 12 months as proposed by the UK government is insufficient because it is not known if “Beijing would change policy towards Hong Kong,” Carmichael said in a statement on his party’s website.

The extension will not include “a whole generation of Hong Kongers, including many pro-democracy activists.”

“The government must not only reopen the BNO Passport so that all people of Hong Kong are eligible, but they must also ensure it gives citizenship or the right to live in the UK permanently,” Carmichael wrote.

British Liberal Democratic Party (center to center-left) expressed its strong support for Hong Kong rights and freedom and strongly condemned Beijing’s encroachment on the city’s autonomy and the handover agreement. The party launched a petition campaign urging the British government to support the Hong Kong Bill.

“Our cross-party Hong Kong Bill, would reopen the BNO passport offer to also give young Hong Kongers the right to live in the UK.” – @amcarmichaelMP

We’re urging the Government do this as a priority.

UK’s Prime Minister Boris Johnson wrote in The Times newspaper on June 3that if China proceeds with its plans to impose the new law on Hong Kong Britain will honor its “obligations and provide an alternative.”

The UK will change its immigration law to extend visa-free access to the United Kingdom for Hongkongers with British National (Overseas) passports from six months to “a renewable period of 12 months,” Johnson said.

Moreover, BNO passport holders from Hong Kong who come to the UK will “be given further immigration rights, including the right to work, which could place them on a route to citizenship,” Johnson wrote.

This is “one of the biggest changes in our visa system in history,” he said. If necessary, the British government will willingly take this step, Johnson added.

However only Hong Kong residents who had British nationality before the handover in 1997 are eligible for BNO passports. Currently, about 350,000 Hongkongers have BNO passports and another 2.5 million can obtain them, Johnson said.

That means that young Hongkongers born after the handover will not be eligible for BNO passport, Jimmy Lai, a Hong Kong entrepreneur and media tycoon said on Twitter.

We welcome the British giving BNO holders the right of abode. But young people born after British left are not BNO holders. They’re our hope and should be given the priority, over old people like me who are near the end of their lives. @BorisJohnsonhttps://t.co/gnfyQERUVy

“They’re our hope and should be given the priority, over old people like me who are near the end of their lives,” Lai said on Twitter directing his message at PM Johnson.

Lai, 72 years old, is one of the main contributors to the pro-democracy camp in Hong Kong and has spoken out against the CCP’s Hong Kong version of national security law. On April 18, Lai was arrested by the Hong Kong police for attending a protest against the extradition bill last year.

What the New Security Law Means for Hong Kong

The National People’s Congress (NPC), China’s rubber-stamp legislature, passed a draft resolution on the so-called “national security law” for Hong Kong on May 28. The new legislation will be drafted in China by the NPC’s standing committee and added to Hong Kong’s mini-constitution, called the Basic Law.

The law is expected to take effect by September bans secession, subversion, and terrorism, as well as activities related to foreign interference. Moreover, Beijing’s security agencies would be allowed to set up operations in Hong Kong.

Some Hong Kong lawmakers and international organizations say that the new law undermines the “one country, two systems” arrangement that separates Hong Kong’s political, legal, and financial infrastructure from mainland China, and is incorporated in Hong Kong’s Basic Law.

State Secretary Mike Pompeo said in a statement that the decision to “impose national security legislation on Hong Kong” will “undermine Hong Kong’s autonomy and freedoms and China’s own promises to the Hong Kong people under the Sino-British Joint Declaration, a UN-filed international treaty.”

Hong Kong became a British colony in the 19th century when Britain defeated China’s Qing dynasty government in the First Opium War, and it was returned to China in 1997 after 155 years of British rule.