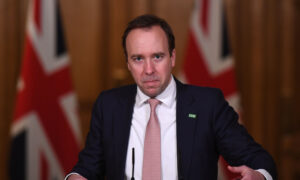 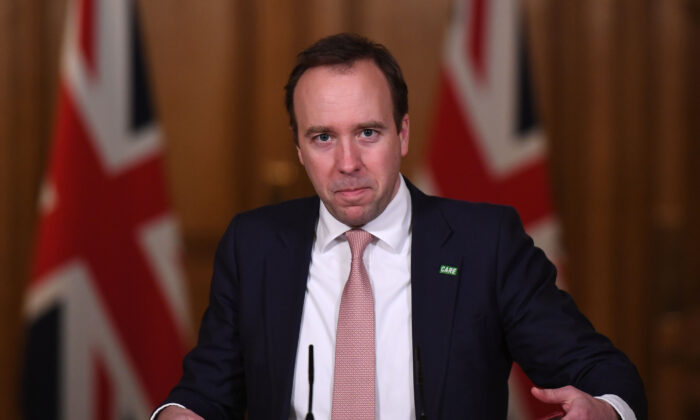 The British government is monitoring the efficacy of existing CCP virus vaccines to see if the jabs need to be modified for new variants of the virus, Health Secretary Matt Hancock said on Tuesday.

“We are doing a huge amount of work with the scientists and the pharmaceutical industry to develop modified vaccines, should they be necessary. We’re also monitoring the results of work to understand the efficacy of the existing vaccines against the variants of concern,” Hancock told the House of Commons.

The CCP (Chinese Communist Party) virus variants first identified in South Africa and Brazil both contain a key mutation called E484K, which is thought to be impacting vaccine efficacy.

“Clinical trials by Novavax and Johnson & Johnson showed that their new vaccines were less effective in South Africa, compared to the UK or USA, and it is presumed that it was because of the high level of virus carrying this E484K mutation,” Dr. Simon Clarke, an associate professor in cellular microbiology at the University of Reading, said in a statement.

On Monday, Public Health England reported that the E484K mutation had been found in a “limited number” of cases of the UK variant.

Dr. Julian Tang, a clinical virologist at the University of Leicester, called it “a worrying development, though not entirely unexpected.”

The UK government is already working with scientists and pharmaceutical firms on potential modifications of vaccines, Hancock said.

“We’re working with pharmaceutical companies and with the scientists to understand both whether such modifications are needed, where they are needed, and how they can be brought to use on the front line as quickly as is safely possible,” he said.

“We have confidence that modifications to vaccines, should they be necessary in large scale, will be available more quickly than the original vaccines.”

The UK has now identified 105 cases of the South African variant, 11 of which do not appear to have any links to international travel.

Those cases are the first in the UK of community transmission of the variant, which is more transmissible and more resistant to antibodies, raising fears that the effectiveness of COVID-19 vaccines could be reduced.

Health authorities have started door-to-door “surge testing” for the variant in eight local areas in England.

Hancock said the programme will be extended to Bristol and Liverpool, where 43 cases of “mutations of concern” had been identified.