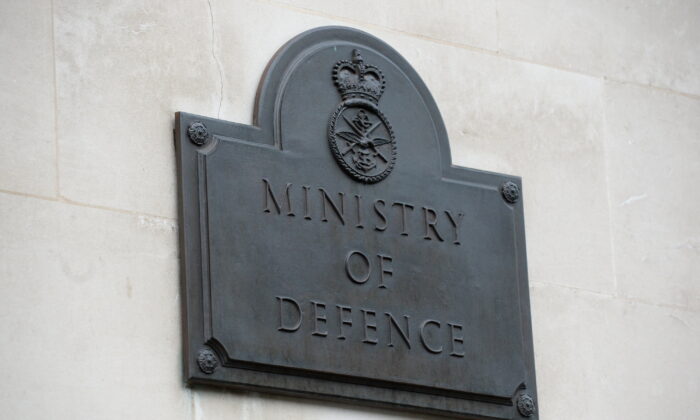 An undated file photo of signage for the Ministry of Defence in Westminster, London. (Kirsty O’Connor/PA)
UK

The UK’s Ministry of Defence (MoD) will throw out of the military personnel found paying for prostitutes, the ministry said, as it launched new policies to tackle poor behaviour in the armed forces.

In a statement on Tuesday, the MoD wrote that it is cracking down “on unacceptable sexual behaviour in our armed forces.”

Minister for Defence People Leo Docherty said that “abusive, discriminatory, or predatory behaviour has no place in our armed forces and these measures send a clear message that these types of behaviours will not be tolerated.”

“As a forward-thinking and modern employer, the armed forces are a place where our serving personnel can thrive, and we will continue to expect the highest values and standards of each and every one of them,” he added.

The new policy will replace rules that currently operate within the military.

This prohibits all “sexual activity which involves the abuse of power,” including “buying sex whilst abroad.” Where proven, personnel convicted of a sexual offence will be discharged from the armed forces.

A new defence strategy called “Zero Tolerance to Sexual Exploitation and Abuse” was drawn up earlier this year (pdf). The policy aligns the Royal Navy, RAF, and army under one approach to dealing with such incidences, which will be implemented across the UK armed forces to enable services to “better support victims and secure justice for them.”

The MoD said it will ensure that “every allegation will be responded to, no matter where the allegation takes place, and introduce a presumption of discharge for anyone found to be engaging in the targeted behaviours, including buying sex whilst deployed outside the UK.”

Another policy called “Tackling Sexual Offending in Defence Strategy” will prioritise victims and aims to reduce the prevalence and impact of sexual offending in the armed forces.

Last year, the Mail on Sunday reported that around 650 British soldiers were confined to their barracks in Kenya after dozens of troops who’d visited prostitutes sought medical advice.

The soldiers, of the 3rd Battalion, the Parachute Regiment battle group, were in east Africa taking part in Exercise Askari Storm. Lt. Col. Mark Swann ordered every soldier to remain on the base, after at least 30 soldiers later reported to the medical centre saying they feared they may have contracted HIV or a sexually transmitted disease after having unprotected sex.

At the time, an army spokesman told the publication, “We expect very high standards of behaviour of our personnel, whether they are on or off duty.”