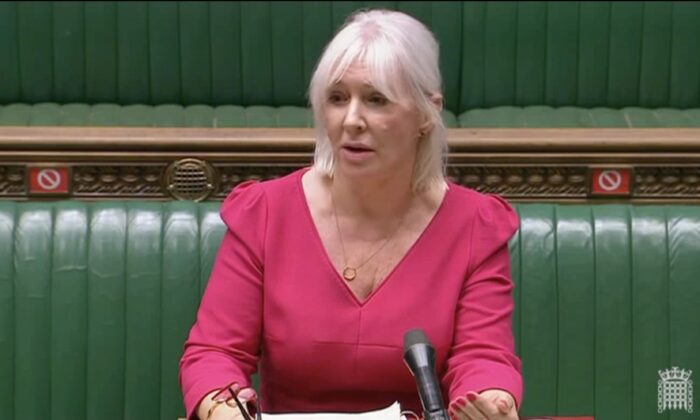 Under Secretary of UK’s Health Ministry Nadine Dories said on Thursday that she was no longer immune to the CCP virus, as her antibodies disappeared 12 weeks after she recovered from COVID-19, the disease caused by the CCP (Chinese Communist Party) virus, commonly known as novel coronavirus.

“I was diagnosed with ​coronavirus on March 7, I had a severe dose and my antibodies had disappeared 12 weeks later. I am no longer immune to coronavirus,” Dories told Parliament.

“Many people who were donating their plasma post-coronavirus for convalescent therapy were told quite quickly, ‘We no longer need your plasma because you do not have any antibodies left,'” She added.

“There is no such thing as herd immunity” without long-term antibodies or a vaccine, she concluded.

The Minister, an ex-nurse, made the comment in Parliament while she joined Chris Bryant MP in arguing against the Great Barrington Declaration, which suggests governments shield the elderlies and other high-risk groups, while allowing those who are not vulnerable to build up herd immunity.

“Even if we were to have an effective vaccine,” co-author Dr. Jay Bhattacharya told UnHerd, “we will be relying on herd immunity as the endpoint of this infectious disease epidemic.”

By Saturday, it received more than 580,000 signatures. Over 42,000 medical and public health scientists or medical practitioners signed the petition. However, the declaration does not verify their documents.

The declaration is also supported by former Conservative party leader Iain Duncan Smith, who argued that risks other than CCP virus also need to be considered.

Without an effective vaccine, we could spend years trying to “push these spikes down,” Duncan Smith said on Choppers Politics.

Therefore, he said the government needs to take a more realistic approach.

“…being in control, managing it, but not expecting, as people say, we can defeat this, because I honestly don’t think we will.”

The Prime Minister’s office on Oct. 7 rejected the “focused protection” proposal,  saying “it is not possible to rely on an unproven assumption” that people at lower risk would avoid transmitting the disease to those who are at a higher risk.

“Antibody positivity does not reflect the extent to which immunity has been established at a population level,” Dr. Sunetra Gupta, co-author of the Great Barrington Declaration, wrote in an email to The Epoch Times. “Our group has been closely involved in these investigations (and has had two peer reviewed papers published in this area this week) and efforts to establish how much of the population had been exposed to SARS-Cov2 has been comprised by their short duration in many individuals and the fact that some people do not make detectable antibodies.

“Importantly, these people are still immune despite having no detectable antibodies,” she wrote. “Asserting that only x [percent] of the population is immune because x [percent] have antibodies does not quite make sense in this context.”