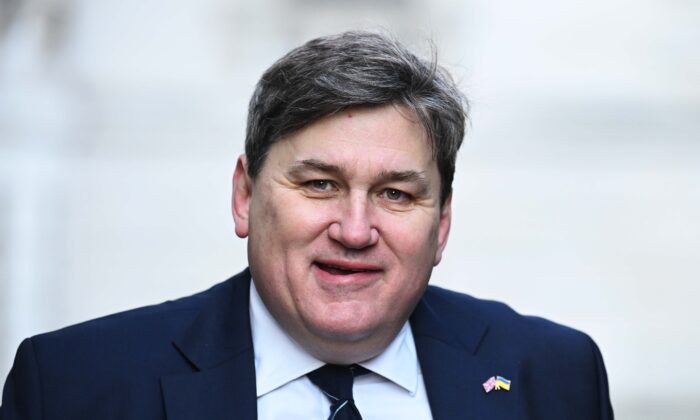 Britain’s policing minister has rejected a watchdog’s suggestion that police officers should use “discretion” when handling shoplifters stealing food out of desperation amid soaring cost of living.

In an interview with The Guardian, Andy Cooke, the new chief inspector of constabulary, said that there will “invariably” be a rise in crime “whenever you see an increase in the cost of living or whenever you see more people dropping into poverty.”

Giving his advice on how police should deal with the challenge, Cooke said: “What they’ve got to bear in mind is what is the best thing for the community, and that individual, in the way they deal with those issue. And I certainly fully support police officers using their discretion—and they need to use discretion more often.”

Cooke said he was not “giving a carte blanche for people to go out shoplifting,” but wanted officers to ensure cases were “dealt with in the best way possible.”

He told LBC radio on May 19: “We first of all believe the law should be blind and police officers should operate without fear or favour in prosecution of the law.

“Secondly it’s not quite right to say that as the economy fluctuates so does crime. We’ve seen economic problems in the past, or not, when crime has risen, or not.”

Asked if ministers will ensure police do not turn a blind eye to shoplifters stealing food, he replied: “Absolutely right. In fact I wrote to chief constables just a year or so ago saying they should not be ignoring those seemingly small crimes.”

Talking to Times Radio, the minister said the cost-of-living problems people are facing are “very difficult for households up and down the land,” but “that does not necessarily mean they’re going to turn to crime.”

He emphasised that he has to challenge “this connection between poverty and crime.”

He said: “What we’ve found in the past, and where there is now growing evidence, is that actually crime is a contributor to poverty. That if you remove the violence and the crime from people’s lives they generally prosper more than they otherwise would.”

The UK government has come under pressure from opposition parties, business groups, and think tanks to go further to support the most vulnerable throughout the cost-of-living crisis.

Malthouse insisted that ministers are already providing support to families.

He told Times Radio, “It still doesn’t mean that we can solve every problem, it’s still going to be hard, it’s going to be tough for families, and what we have to hope is that this storm of inflation will pass quite quickly.”