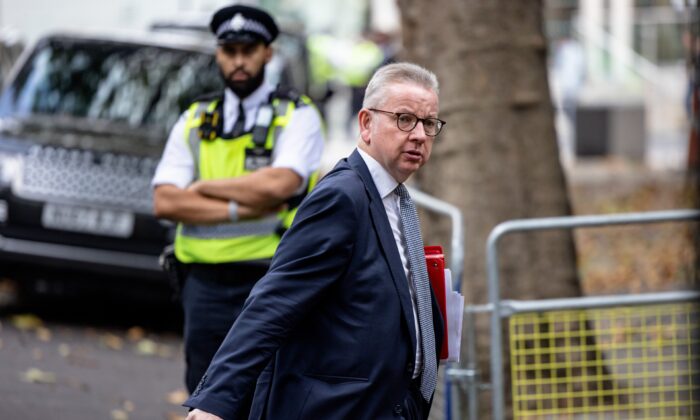 UK Secretary of State for Levelling Up, Housing, and Communities Michael Gove at the Science Museum in London, on Oct. 19, 2021, England. (Rob Pinney/Getty Images)
UK

A senior British Cabinet minister had to be escorted by police away from a protest on Tuesday after he was surrounded by a group of anti-lockdown demonstrators in central London.

Communities Secretary Michael Gove was approached by a number of people with video cameras when he was walking in Westminster.

One protester who approached Gove asked him how he justified “illegal lockdowns.” Another man appeared to shout “Arrest Michael Gove.”

Gove, who was carrying a bag, a file, and a drink at the time, was asked by an officer where he was going.

Gove pointed down the street and officers then put themselves between the minister and the protesters and guided him into a nearby building.

The Metropolitan Police reported the incident on Twitter: “We’re aware of a protest in Westminster today which is marching to a number of locations.

“During this protest, a group attempted to surround a Member of Parliament on Horseferry Road. Our officers were immediately on scene where they safely escorted him to a nearby building.”

The incident took place amid concerns over security for members of Parliament following the fatal stabbing of Conservative MP Sir David Amess last Friday by a suspected terrorist.

Downing Street reacted by saying the actions of the protesters were “completely unacceptable.”

The prime minister’s official spokesman said: “The approach we have taken, particularly on issues such as vaccination, is to provide clarity and information to provide reassurance to those who have legitimate questions.

“What is completely unacceptable is for those who disagree with our approach to try and target individuals, be they ministers or schools or parents and children. That sort of behaviour is abhorrent and will never be tolerated in a democratic society.”

The UK government lifted most of its remaining COVID-19 restrictions on July 19 in what was dubbed “Freedom Day.”

The government had planned to introduce vaccine passports for nightclubs and crowded events, but dropped the plan on Sept. 12 after it came under pressure from industry leaders and its own backbench MPs.

Prime Minister Boris Johnson said on Sept. 14 that he hoped the UK could remain “one of the most free societies” in Europe, but he stressed the government stood ready with a “plan B” if COVID-19 took off again over the coming months, which could include vaccine passports and the return of masks in public places.

Downing Street said on Tuesday that it is keeping a “very close eye” on CCP (Chinese Communist Party) virus case rates and acknowledged there are indications that hospital admissions and deaths are rising.

But the prime minister’s official spokesman said there were “no plans” to use the contingency measures set out in the government’s strategy to contain the virus this winter.