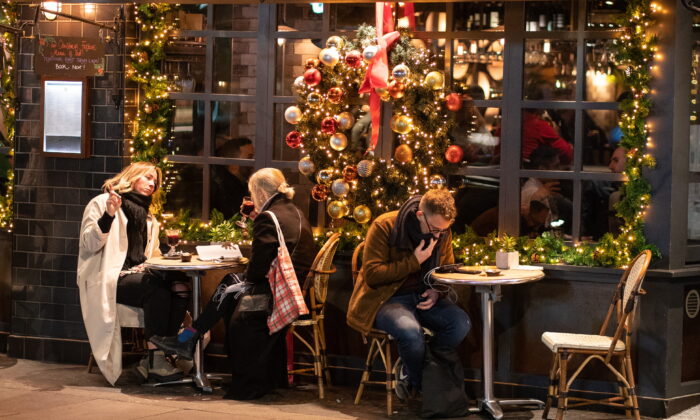 A cabinet minister has defended the amount of financial support given to businesses amid fresh calls for more support for the beleaguered hospitality sector.

Health Minister Gillian Keegan said Tuesday that the restaurants were “pretty full” when she went out with her family.

Asked if more financial support should the given to businesses that will be impacted by the government’s call for caution with their New Year celebrations, Keegan told Sky News that a £1 billion ($1.32 billion) package had already been put in place, referring to a package announced on Dec. 21 that offers hospitality and leisure businesses one-off grants of up to £6,000 ($7,950) per premises and grants for other businesses, in anticipation of further restrictions.

“So, you know, I’m obviously in London at the moment, but I think people are still going out, but they are just taking a lateral flow test before and obviously being a bit more cautious.”

Prime Minister Boris Johnson and Health Secretary Sajid Javid confirmed on Monday that no more restrictions will be imposed, at least before the New Year.

The hospitality industry welcomed the announcement, but Baroness Ruby McGregor-Smith, president of the British Chambers of Commerce, warned it would not make up for the business lost during what should have been the busiest time of the year, as people stayed away from pubs and restaurants.

“In January, February, March, we have increasing labour costs and increasing energy costs, among many other costs. The list goes on for businesses, particularly in hospitality,” she told the BBC Radio 4’s “Today” programme.

“I am delighted to see that we are protecting New Year’s Eve, but it just won’t go far enough.”

McGregor-Smith urged the government to extend the business rates relief and the emergency rate of VAT beyond the end of March, and to bring back a “focused” furlough support scheme.

She said that businesses in the sector also needed flexibility over the repayment of loans that they had taken out to support them through the pandemic.

McGregor-Smith was backed by Andy Wood, the chief executive of Adnams brewery, who said there had been a 50 percent drop in visitors to pubs and hotels after the chief medical officer for England, Professor Chris Whitty, urged people to be cautious about socialising following the emergence of the fast-spreading Omicron variant.

“More than half of Christmas has been lost. This is a sector that has the economic equivalent of long COVID,” Wood told “Today.”

“There is going to need to be support for the sector through the dark months of January, February, and March,” he added.