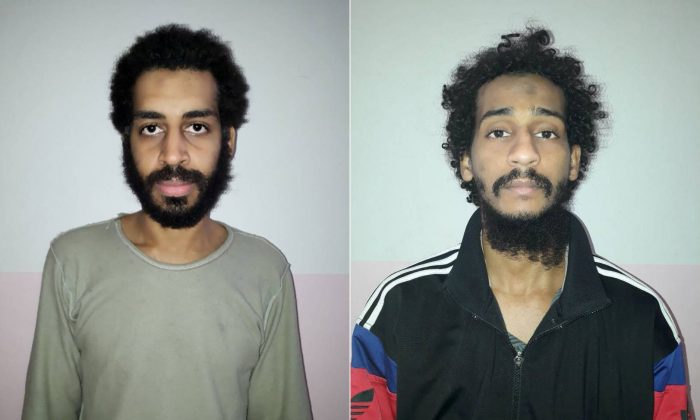 LONDON—The UK government has cleared the way for two members of the British “Beatles” ISIS terror cell to face trial in the United States for their roles in kidnapping, terrorism, and murder in Syria.

In a leaked letter, the UK interior minister appeared to blur the government’s official opposition to the death penalty, agreeing to pass on evidence from UK counterterrorism investigations.

The notorious ISIS Beatles cell in Syria acquired its nickname because it was composed of four British members, after videos emerged in 2014 in which their distinctive accents could be heard.

The cell, whose most prominent member, “Jihadi John” was killed in an airstrike in 2015, was behind the beheadings of U.S. journalists, British aid workers, and a U.S. humanitarian worker.

In a leaked letter obtained by the Daily Telegraph, British Interior Minister Sajid Javid told the U.S. attorney general that it would share intelligence on the Beatles cell members Alexanda Kotey and Shafee El-Sheikh to enable prosecution in the United States.

Javid’s communication appears to put aside the UK’s previous official stance on the death penalty, saying that the UK sought no “assurances” that the pair would not face execution in the United States.

In the letter of July 22, Javid agreed to pass on information to the United States obtained over a four-year investigation by British counterterrorism forces, covering 14 countries and 600 witness statements.

In 2014 and 2015, the Beatles cell held over 20 Western hostages in Syria, appearing in various online propaganda and execution videos.

Kotey and El-Sheikh were caught in February 2018 by Syrian Kurdish fighters. The UK government is thought to have secretly revoked their citizenship and U.S. and UK authorities have been discussing how to handle prosecutions.

Javid wrote that UK counterterrorism officers had weighed up the two routes of prosecution under UK and U.S. law, working alongside the FBI.

“In this instance we believe that a successful federal prosecution in the U.S. is more likely to be possible because of differences in your statute book and the restrictions on challenges to the route by which defendants appear in U.S. courts,” he said.

The letter states, “In light of this, the UK does not currently intend to request, nor actively encourage, the transfer of Kotey and El-Sheikh to the UK to support a future UK based prosecution.”

Javid appeared to overturn the current policy that states that assistance should not be given to overseas prosecutions without written assurances that those found guilty would not face the death penalty.

Javid wrote, “I am of the view that there are strong reasons for not requiring a death penalty assurance in this specific case, so no such assurances will be sought.”

“As you are aware, it is the long-held position of the UK to seek death penalty assurances, and our decision in this case does not reflect a change in our policy on assistance in U.S. death penalty cases generally, nor the UK Government’s stance on the global abolition of the death penalty,” he wrote.

According to the Counter Extremism Project Kotey is the London-born son of a Ghanaian father and Greek-Cypriot mother, who was radicalised in the early 2000s, becoming involved with a radical network linked to the 7/7 bombings in 2008.

Shafee El-Sheikh grew up in London after has parents escaped Sudan’s civil war in 1993. He was radicalised rapidly in 2011 after befriending an Eritrean man whose father promoted Islamist propaganda, leaving for Syria in 2012 to join an al-Qaeda affiliate in Syria and later ISIS.