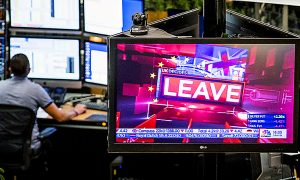 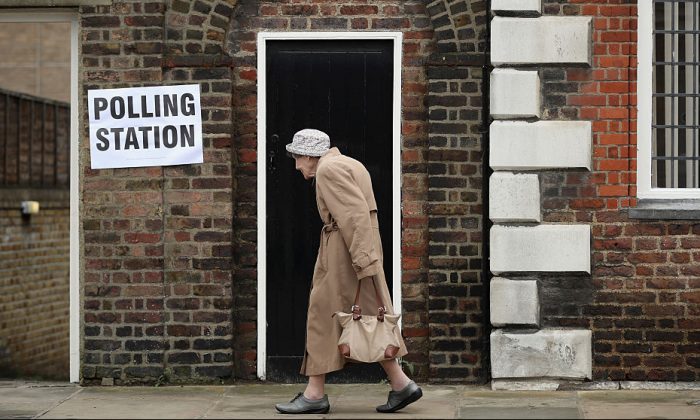 A member of the public arrives to cast her vote in the EU referendum at Royal Hospital Chelsea on June 23, 2016, in London. Photo by Dan Kitwood/Getty Images
Viewpoints

Voters decided to leave the European Union on June 23, 2016, in the British “Brexit” Referendum. The demographics show that the majority of over-50s voted to leave the EU. Since then, there has been a sustained attack in the media by young people who blame “old voters” for the “catastrophe that will destroy Britain as we know it.”

From food and drug shortages to hospitals being unable to function and even high house prices and rents, they are anguished that they have “no future now that we can’t travel around the EU.”

They say older folk live the high life on massive pensions (not true!) and don’t care about the younger generation’s prospects. This is especially hurtful to seniors who suffered through pitiful wages with long hours well into the 1980s and have the third-lowest state pension in the developed world averaging $750 a month.

Ugly public discourse has permeated British life since June 2016, with celebrated writers and entertainers divided between the “Remainer” and “Brexiteer” camps. From the day after the Referendum, the vitriol began to fly across the media.

Those who supported Remain—they became known as “Remoaners”—accused Leave supporters of being “quasi-criminal,” duped by literature and billboards suggesting the NHS, the British health care service, would enjoy billions more in revenue if the UK no longer had to contribute to the EU. Young celebrities have suggested the vote should be removed from the over-75s and that there even ought to be a mechanism to find out who voted Leave and have the Electoral Commission permanently remove Leave voters from the register.

Remainers have also accused Leave supporters of being anti-immigrant and racist, “succumbing to propaganda” from the ultra-conservative UKIP party, at the time headed up by Trump-admirer Nigel Farage MEP (member of the European Parliament).

The worst anger, however, has emanated from millennials.

British young adults say older Leave voters got free education. Firstly, yes, college was free, with a grant, until the 2000s, but what they do not appreciate is that World War II, rationing, and the hardships of the 1950s and ’60s meant a generation, particularly of women, had to go to work in their teens and miss higher education.

Secondly, college tuition fees came in long before the Brexit Referendum, so it is absurd to somehow blame older folk for the hardship of paying college fees. I had three jobs during high school, college, and graduate school. When college tuition fees increased in 2010, there were riots in Britain, but writer and critic Bonnie Greer, an American expatriate like me, reminded the angry youngsters on BBC “Question Time” that she “flipped burgers” to pay for college. British students take a “gap year,” which their elders could never have enjoyed.

The Guardian columnist Polly Toynbee, a passionate Remainer, has celebrated the statistic that older people are dying off in droves, meaning a Second Referendum will result in a resounding Remain-in-EU tally. Her point? Young people wanting to traverse Europe will not have their futures ruined by thoughtless older voters. When I wrote on Twitter about this, saying that as a stage 4 cancer sufferer, I really do not regard dying as something to celebrate, a nasty Remainer tweeted me to ”do something productive” until I die and remember that my generation (I am 65) “produced the wrong result.” Really?

It is said that the measure of a nation’s decency is the way it treats its oldest citizens. Over the past four years, I have attended a local London Christmas lunch at the Danubius Hotel hosted by the combined clergy, Westminster Council, and the American School in London. What has struck me most profoundly is the presence of scores and scores of older guests with nowhere to go over the Christmas holiday because their children or grandchildren do not want them, or to use a British expression, “the kids have other fish to fry.”

Seeing and hearing the bitterness bordering on contempt millennials have for the older generation, this does not surprise me.

I invite them to think about this: Britons in their 70s, 80s, and 90s, including thousands of Jewish refugees who made it to these shores from Nazi Germany, lived through diphtheria and polio epidemics, rickets and tuberculosis, and the privations of the Great Depression.

In the 1930s, there were strikes and the threat of rising fascism led by Oswald Mosley’s black-shirts. Then came World War II, the five-year terror of the Blitz and of V1 and V2 rockets raining down on UK cities, with gas and water mains bursting and homes and places of work destroyed.

After the war, food rationing carried on into the 1950s and hardship characterized life into the 1960s, but gritty Britons worked hard so their children and grandchildren could have a better life. Yet young people denigrate them as “living off the fat of the land” and “ruining their future” because they have voted in the majority to leave the EU.

My older friends who supported Leave include an award-winning photographer who lives in Cornwall and for decades has worried about the financial plight of the fisheries, believed to have been eroded by EU fishing rights. Another is a retired pilot who, like my other Leave friends—one a barrister, one an architect, one an entertainment agent, and one a linguist with a doctorate—have been worried for years about immigration reducing job prospects for British talent. “Brexiteers” are accused by millennials of being anti-youth, but what could be more pro-youth than wanting jobs for them rather than for EU citizens?

What I find amusing is that, until the 2016 Referendum, young people I encountered never watched the news or read a newspaper—their source of information was their cellphones. All of a sudden after the Brexit vote, they rant non-stop about the disaster that has befallen them because “ignorant and ill-informed” seniors voted to leave the EU. Vast audiences for political television and radio programs are demographically older, so how could they be the “great uninformed masses?”

Taxi drivers always tell me, “British people don’t want to do the jobs the Poles and Romanians do.” Well, there are hundreds of thousands of unemployed Britons going to food banks, and after Brexit, they may have to take those jobs. When I had an ultrasound procedure on my legs at St. Mary’s Hospital and asked the technician if my pain might be being caused by statins he said, “ No English!” Am I to seriously believe that the nation that gave the world Edward Jenner, Joseph Lister, Alexander Fleming, and other legends doesn’t have enough young people to train to be ultrasound technicians?

When the British Academy of Film and Television Arts emailed the membership that we older members must consider “making way for young blood,” the reaction was one of fury. At the Annual General Meeting, some of the greatest figures in film and television expressed their indignation. The cry was, “How dare you?”—which I say to young Britons condemning the old. If the old, in their decades of wisdom, feel the UK can stand on its own two feet without the increasingly turbulent EU ruling them, the young should listen and not repudiate them.

Without the Greatest Generation, the Thousand-Year Reich would have triumphed. Millennials: Remember that, OK?

Philadelphia-born Carol Gould is a UK-based political commentator and broadcaster. She is the author of “Spitfire Girls” and “Don’t Tread on Me: Anti-Americanism Abroad.”