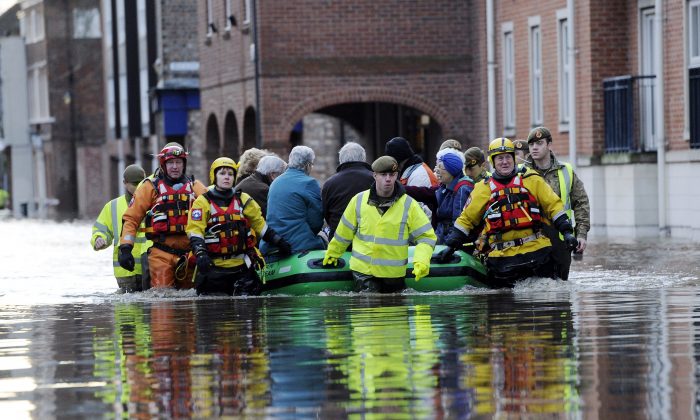 Members of the army and rescue teams help evacuate people from flooded properties after they became trapped by rising floodwater when the River Ouse bursts its banks in York city center Sunday, Dec. 27, 2015. (John Giles/PA via AP)
Europe

UK Military Helps Combat Flooding as It Spreads to Cities

Weeks of persistent rainfall has saturated the ground and swollen the rivers to record levels, leaving entire swathes of northern England vulnerable.

Cameron said the flooding is unprecedented and vowed to do everything possible to protect people and their property as the damage spread to the major cities York, Leeds, and Manchester. He said protective systems and contingency plans will be reviewed because the frequency of such extreme weather events seems to be on the rise.

Weeks of persistent rainfall have saturated the ground and swollen the rivers to record levels, leaving entire swathes of northern England and smaller parts of Wales and Scotland vulnerable. Several hundred flood warnings remain in effect.

There have been no fatalities or serious injuries reported, but hundreds of people have been evacuated from houses and apartments in York, 200 miles north of London, where 3,500 properties are judged to be at risk. Emergency crews worked extra shifts to try to restore power to roughly 7,500 blacked-out homes in the greater Manchester and Lancashire areas.

“In Lancashire every single river was at a record-high,” she said. “In Yorkshire, we have seen some rivers a meter (about a yard) higher than they have ever been before. Clearly, in the light of that, we will be reviewing our flood defenses.”

Several hundred people had been evacuated the day before in the West Yorkshire and Lancashire regions, and officials said thousands had lost power. The number of people affected continues to grow as flooding spreads and impacts cities as well as villages and towns.

A picturesque 200-year-old pub, The Waterside, in the greater Manchester area, collapsed, and part of the structure was swept away by the River Irwell. Rising river levels also threatened downtown Manchester, and police dealt with a ruptured gas main and small fire believed to have been caused by the flooding.

The agency used its Twitter feed to beg people to be cautious, tweeting that driving or walking in flowing flood waters could be life-threatening.

Rescue crews have been using boats to help remove people from their homes and in some cases from their nearly submerged vehicles.