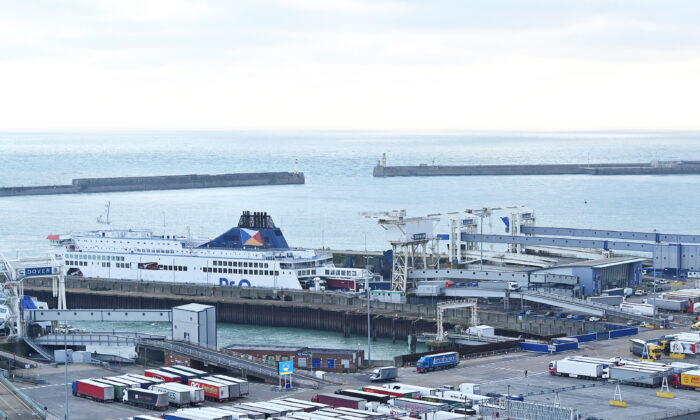 Port of Dover on the south coast of England on Dec. 10, 2020 (Justin Tallis/AFP via Getty Images)
UK

The United Kingdom and Mexico on Tuesday signed a continuity agreement to keep trade going under current terms after Brexit.

The UK’s Department for International Trade (DIT) said that the deal represents another step closer for the UK to joining the Comprehensive and Progressive agreement for Trans-Pacific Partnership (CPTPP).

The agreement, signed by the UK’s Secretary of State for International Trade Elizabeth Truss, and the Minister of Economy of Mexico Graciela Márquez Colín, “will maintain preferential access for trade between Mexico and the UK following the end of the UK’s Transition Period with the EU” on Dec. 31, 2020, the two countries said in a joint statement.

Truss wrote on Twitter that the agreement secured over £5 billion ($6.72 billion) worth of trade between the two countries.

Today we signed a deal with Mexico supporting a trading relationship of more than £5bn. 🇬🇧 🇲🇽
The deal means:

“We look forward to working together with our Mexican friends and allies on a new and ambitious trade agreement in 2021,” she said in a statement.

“This will allow our two countries to go much further in areas such as data, digital trade, investment, intellectual property, and services.”

The current trade between the UK and Mexico are mostly in the automotive, pharmaceutical, textiles, agriculture, food and drink industries, and other manufacturing industries, according to the DIT.

Without the continuity deal, the UK would have to pay around £59 million ($79.27 million) in duties if it continues all current trades with Mexico under the WTO terms.

The DIT said that it has secured trade agreements with 58 countries so far, accounting for £198 billion ($266.01 billion) worth of annual trade, 96 percent of the value of trade with non-EU countries that the UK aimed to secure continuity agreements with.

“This is also the seventh trade deal we’ve secured with a member of CPTPP, the grouping of 11 dynamic economies around the Pacific,” Truss said.

The International Trade Secretary said that she looked forward to making an application for the UK to join CPTPP “early next year.”

Besides Mexico, the UK has reached trade agreement with Canada, Japan, Singapore, Vietnam, Chile, and Peru.

The UK is in trade talks with other countries including, the United States, Australia, and New Zealand.

On Sunday, Truss told Reuters  that “talks with Australia are advancing well.”

With only a few days left, the UK and the European Union on Monday reiterated their commitment to try to reach a deal on post-Brexit trade relations although the positions of the two sides remain “far apart.”