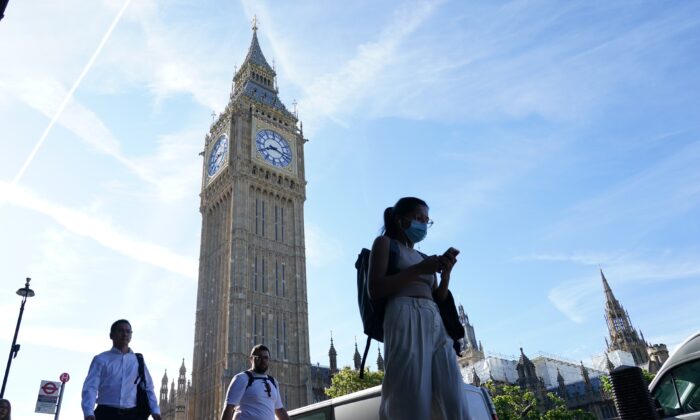 People walk past Big Ben at the Houses of Parliament in London, on July 15, 2022. (Dominic Lipinski/PA Media)
UK

The UK’s Met Office has issued its first ever red warning for extreme heat, as it warned of a “potentially very serious situation” in parts of England that could pose a risk to life.

The red warning, the first of its kind ever issued, covers an area from London up to Manchester and then up to the Vale of York, said Met Office spokesman Grahame Madge, adding: “This is potentially a very serious situation.”

“Stay out of the sun, keep your home cool, think about adjusting your plans for the warning period,” she said.

The UK Health Security Agency has increased its heat health warning from level three to level four, which indicates the situation amounts to a “national emergency.”

Level four is reached “when a heatwave is so severe and/or prolonged that its effects extend outside the health and social care system… At this level, illness and death may occur among the fit and healthy, and not just in high-risk groups,” it said.

England’s chief medical officer, Professor Sir Chris Whitty, asked people on Twitter to look out for each other.

He said: “Please remember the signs of heat exhaustion and heatstroke especially for older and medically vulnerable people. Early intervention to cool people down and rehydrate them can be lifesaving.”

A Number 10 spokesman said railway speed restrictions may be needed on “some parts of the network next week to manage the hot weather and to avoid any potential damage.”

Network Rail has warned people to travel only if absolutely necessary amid the high temperatures forecast on Monday and Tuesday.

Meanwhile, motorists have been advised to try to make their journeys outside of the hottest periods of the day, particularly if they have older cars.

Tim Doran, from the RNLI Water Safety Team said the service was anticipating a “busy weekend” for its lifeboat crews and lifeguards.

“If you are planning on going to the beach, we would encourage you to visit a lifeguarded beach and swim between the red and yellow flags,” he said.