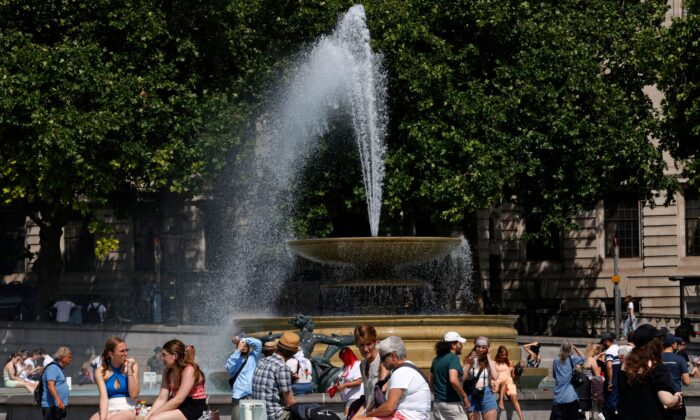 People cool off beside the fountains in Trafalgar Square in central London on June 17, 2022. (Carlos Jasso/AFP via Getty Images)
UK

The UK’s Met Office has extended its amber warning for “extreme heat” in much of England and Wales to cover Tuesday next week.

The warning for exceptionally high temperatures was previously issued to cover Sunday, but the Met Office has extended it twice in two days to cover both Monday and Tuesday.

The office said: “A hot spell is likely to develop from Sunday, likely peaking early next week, leading to widespread impacts on people and infrastructure.

“Population-wide adverse health effects are likely to be experienced, not limited to those most vulnerable to extreme heat, leading to potential serious illness or danger to life.”

The heatwave is a result of hot air flowing to the UK from the European Continent.

Temperatures reached a high of 31.7C at Wisley, Surrey, on Tuesday, and in some parts of London only dropped to 21C overnight.

After slightly lower temperatures for the next couple of days, the heat is set to build over the weekend, with temperatures in the high 20s and reaching 30C in some areas on Sunday.

Temperatures could peak in excess of 35C in central and southeast England, and more widely around 32C within the area covered by the warning, with Monday and Tuesday most likely to see the peak of the heat, the Met Office said.

Northern Ireland and Scotland could also see temperatures in the high 20s.

Meteorologist Annie Shuttleworth said: “We’re looking at a prolonged spell of hot weather and very hot nights. It’s likely we will see some areas, particularly more urban areas in the south staying above 20C, so we could see some tropical nights.”

The health authorities have issued heat-health alerts to most of the country.

Dr. Agostinho Sousa, from the UK Health Security Agency, said: “Most of us can enjoy the hot weather when it arrives, but it is important to keep yourself hydrated and to find shade where possible when UV rays are strongest, between 11 a.m. and 3 p.m.

“If you have vulnerable family, friends, and neighbours, make sure they are aware of how they can keep themselves protected from the warm weather.”

Ambulance services are already on the highest level of alert. London Ambulance Service urged the public to support it by only calling 999 in the event of a life-threatening emergency, keeping hydrated, and staying out of the sun during the hottest periods of the day.