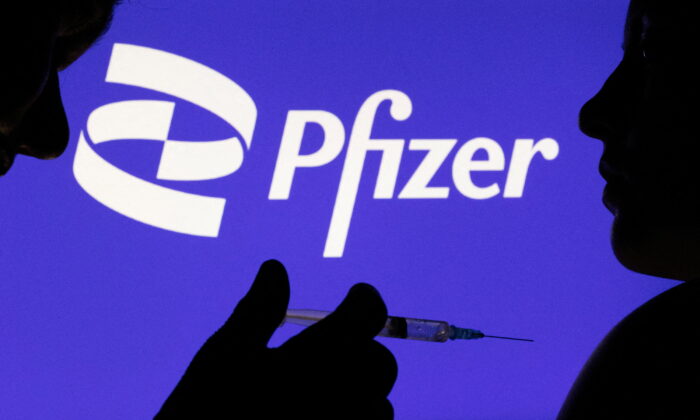 A person poses with a syringe in front of the Pfizer Inc. logo in this illustration photo taken on Dec. 11, 2021. (Dado Ruvic/Reuters)
UK

The Medicines and Healthcare products Regulatory Agency (MHRA) said it has approved the vaccine, which targets two novel coronavirus variants, for use in individuals aged 12 and above, at least three months apart from the last prior dose of a COVID-19 vaccine.

MHRA Chief Executive Dr. June Raine said the vaccine showed “a strong immune response against the Omicron BA.1 variant as well as the original strain” in the clinical trial.

Raine said bivalent vaccines are helping the UK to “meet the challenge of an ever-evolving virus” and “help protect people against COVID-19 variants.”

She also said there is a “comprehensive safety surveillance strategy for all UK-approved COVID-19 vaccines,” including the newly approved bivalent booster.

The MHRA’s press release cited a study published by The Lancet in June, which estimated the vaccines had prevented up to 19.8 million deaths in the first year after being rolled out.

The Commission on Human Medicines (CHM), a non-departmental public body that advises ministers on the safety, efficacy, and quality of medicinal products, has endorsed the MHRA’s decision following an independent review.

The Joint Committee on Vaccination and Immunisation also updated its advice to include the newly approved vaccine in its list of recommended jabs for the UK’s autumn booster campaign.

Moderna’s bivalent vaccine, which was approved on Aug. 15, has already been included in the list along with the original version of the two vaccines.

The updated Moderna booster approved in the UK included spike proteins from the Wuhan strain and Omicron subvariant B.1.1.529 (pdf).

All three variants are no longer dominant in the UK.

By July 22, Omicron sub-lineages BA.5 had become the predominant circulating variant in the UK, but the relative growth rate had “slowed considerably,” likely “due both to it saturating as the dominant variant” and misclassification of the strain as other variants, according to the latest update (pdf) from the UK Health Security Agency.

The agency also said BA.2.75, a strain first identified in India in May, had been detected in the UK.

The U.S. Food and Drug Administration (FDA) on Wednesday granted emergency use authorization to Moderna and Pfizer for their updated boosters.

Those versions contained the spike proteins from two more recent subvariants of the Omicron variant, BA.4 and BA.5, but in order to have the more updated version, the FDA opted to not require human trial data and granted authorization based on mice trial data—eight mice in the Pfizer trial and 16–20 mice in the Moderna trial.

Diagnostic pathologist Clare Craig, a vocal critic of the UK government’s pandemic response including the vaccination campaign, previously told The Epoch Times that repeatedly vaccinating people against older versions of the spike protein is “forcing our immune system to go down one particular strategy” while the virus is “evolving away from having that appearance.”

She said people cannot be expected to be injected every six months with vaccines containing the spike protein, which she said is the “most damaging” part of the virus.

Craig and mathematician Norman Fenton, both members of the Health Advisory and Recovery Team, also argued that the COVID-19 vaccines had not demonstrated effectiveness in saving lives and expressed concerns over the safety of the vaccines.

Fenton previously disputed the Lancet study cited by the MHRA, telling The Epoch Times last week that he believes the figures are “ridiculous” because the researchers had been comparing the real death toll with their earlier projections that were based on “flawed statistical models.”