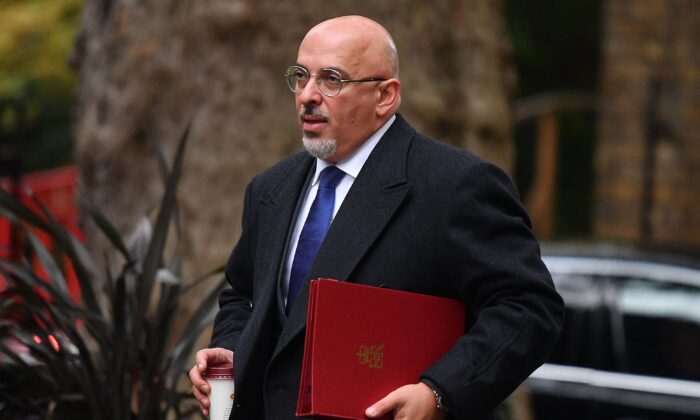 The UK government is yet to decide whether to offer the Pfizer-BioNTech COVID-19 vaccine to all 12- to 15-year-olds, vaccines minister Nadhim Zahawi said on Sunday.

It comes after the government’s independent advisory body on vaccination and immunisation advised against offering the vaccine to healthy children in this age group.

“We have not made any decisions,” Zahawi told Sky News’s “Trevor Phillips on Sunday” programme.

But the minister promised that parents’ consent will be sought if the government pressed on with its vaccination plan.

“I can give that assurance, absolutely,” he said when asked if the parents will be asked.

The Pfizer-BioNTech COVID-19 vaccine was approved in June for use on children over 12 years old by the Medicines and Healthcare products Regulatory Agency (MHRA).

The Moderna vaccine was approved for children over 12 years old last month by the MHRA, but it has not yet been given to children in the UK’s vaccination programmes.

The Department of Health and Social Care on Aug. 28 preemptively told England’s health service to get ready to vaccinate all 12- to 15-year-olds in anticipation of a recommendation in favour of mass vaccination for the age group.

But the Joint Committee on Vaccination and Immunisation (JCVI) on Friday said it was taking a “precautionary approach” and not advising universal vaccination for 12- to 15-year-olds because children in this age group have a very low risk of becoming severely ill from the CCP (Chinese Communist Party) virus—with just two children in a million admitted to intensive care, according to the latest analysis.

JCVI Deputy Chair Professor Anthony Harnden told The Guardian on Saturday that the “health benefits from vaccinating well 12- to 15-year-olds are marginally greater than the risks.”

Harnden said that he believes it’s “entirely reasonable” to give the vaccine to healthy teenagers with their parents’ consent if “the educational benefits of vaccinating make that benefit/risk balance tip towards a greater benefit/risk ratio.”

The JCVI’s statement on Friday said that any indirect benefit that healthy children can gain from vaccination is “highly uncertain,” and that “there is increasingly robust evidence of an association between vaccination with mRNA COVID-19 vaccines and myocarditis.”

It added that while adverse events are still very rare and mostly short, “the clinical picture is atypical and the medium to long-term (months to years) prognosis, including the possibility of persistence of tissue damage resulting from inflammation, is currently uncertain as sufficient follow-up time has not yet occurred.”

Health ministers of the UK’s four nations have written to their chief medical officers, asking them to “take forward work (drawing on experts as you see fit) to consider the matter from a broader perspective, as suggested by the JCVI.”

The ministers said they will make their decision based on the advice from both the JCVI and the chief medical officers.

Schools in the UK were closed for months during lockdowns since March 2020.

In July this year, more than a million pupils were absent from school in one week, mostly due to being in contact with someone who tested positive for the CCP virus. But MPs were told in August that the absence of children at schools was “largely driven by the testing policies.”

“If you test a lot of children and show that there’s [sic] some cases, and you end up sending home their contacts or classes or even year groups, that has a huge impact,” Professor Sir Andrew Pollard, director of the Oxford Vaccine Group, told the All-Party Parliamentary Group on Coronavirus.

Pollard said that there’s no need to test children en-mass because they generally don’t get severe symptoms from the CCP virus, and those who are most susceptible to severe disease would be offered vaccination.

Correction: A previous version of this article incorrectly stated the number of COVID-19 vaccines approved for children over 12 years old. The Epoch Times regrets the error.