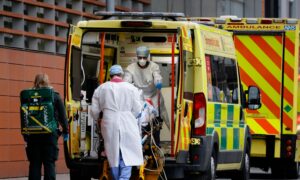 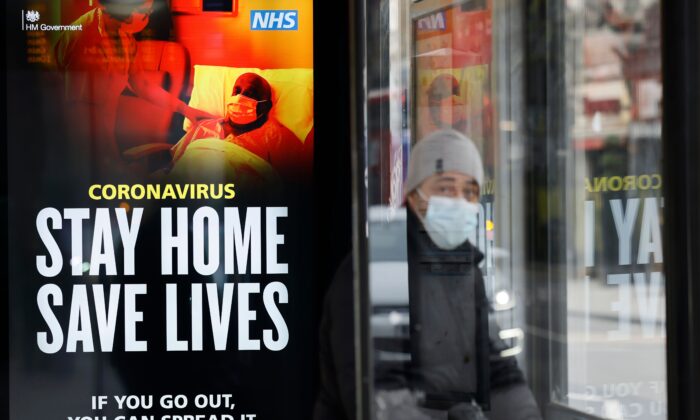 A commuter wears a facemask as he sits in a bus shelter with NHS signage promoting "Stay Home, Save Lives" in Chinatown, central London, on Jan. 8, 2021. (Tolga Akmen /AFP via Getty Images)
UK

The chief medical officers of all four nations of the United Kingdom agreed on Thursday to lower the CCP virus alert level from level five to level four, citing the receding threat to health services.

The decision was reached “following advice from the Joint Biosecurity Centre and in the light of the most recent data,” said the chief medical officers of England, Scotland, Wales, and Northern Ireland in a joint statement.

Thanks to the hard work of the British public, the UK Chief Medical Officers have recommended that the UK COVID-19 alert level move from level 5 to level 4.

It’s vital we continue to suppress this virus as we roll-out the vaccine. Stay at home.https://t.co/GW7UtUQkPJ

UK Health Secretary Matt Hancock welcomed the news, but urged the public to continue to “stay at home” as “it’s vital we continue to suppress this virus as we roll-out the vaccine.”

The chief medical officers said that the health services “remain under significant pressure with a high number of patients in hospital.”

But they said the numbers are “consistently declining, and the threat of the NHS and other health services being overwhelmed within 21 days has receded.”

“We should be under no illusions—transmission rates, hospital pressures, and deaths are still very high. In time, the vaccines will have a major impact and we encourage everyone to get vaccinated when they receive the offer. However, for the time being it is really important that we all—vaccinated or not—remain vigilant and continue to follow the guidelines,” they said.

“We know how difficult the situation has been and remains to be for healthcare workers. We thank them for their immense effort, skill, and professionalism throughout the pandemic.”

According to official daily figures on Thursday, there were a further 9,985 new CCP (Chinese Communist Party) virus cases across the UK, and 323 deaths were reported within 28 days of a positive test.

The #COVID19 Dashboard has been updated: https://t.co/NksBC7dY3d

Nearly 18.7 million people had received the first dose of a COVID-19 vaccine by Wednesday.

Prime Minister Boris Johnson on Monday set out his “roadmap” out of the lockdown, which includes four stages with five weeks in between.

Some lawmakers in the ruling Conservative party have criticised the government plan, saying its slow pace will cause unnecessary further damage to the economy.