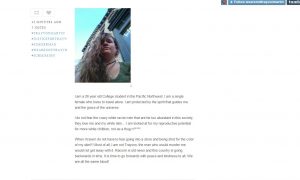 UK Looking at Banning Racist Trolls: Is It a Slippery Slope?

U.K. lawmakers are proposing recommendations that would ban racist trolls from social media websites like Twitter and Facebook after an alleged rise in anti-Semitism recently. However, the move has drawn criticism from rights groups, which have said it’s akin to censorship.

The U.K.’s All Party Parliamentary Inquiry Into anti-Semitism called for “urgent action” from the government, police, and prosecutors to combat a “disturbing” rise in anti-Semitism. A report drafted by the organization said “Holocaust” and “Hitler” were in the top 35 key words on Twitter last summer.

“A concern we have is that bans on Internet use are often created by analogy [with] injunctions that prevent someone from visiting a certain location … The internet isn’t a ‘location,’ or the scene of a crime. It’s a huge range of services, from paying your electricity bill to reading the news, to petitioning your local politician,” Danny O’Brien, the international director of EFF, told Epoch Times via email.

The lawmakers have asked the Crown Prosecution Service to look into whether prevention orders used to ban sex offenders from certain websites could be used for perpetrators of hate crimes.

“There is an allowance in the law for banning or blocking individuals from certain aspects of internet communication in relation to sexual offences. Informal feedback we have received from policy experts indicates that this is a potential area of exploration for prosecutors in relation to hate crime,” reads the report.

If there’s a way to prove if “someone has made a considered and determined view to exploit various online networks to harm and perpetrate hate crimes against others then the accepted principles, rules and restrictions that are relevant to sex offences must surely apply,” the report argues.

O’Brien says that if the U.K. decides to implement the recommendations, it raises the possibility of not just silencing certain people, but disrupting many aspects of their life.

“If you had an order that forbade someone from using the Internet, or even using social media entirely, then that may well be disproportionate, in the same way as forbidding someone who had said something hateful in the past from saying or communicating anything in the future,” says O’Brien.

This would turn it from an “order to prevent hate speech into a punishment by itself,” he adds.

He also points that that since hate speech is such a hard crime to prosecute, the new orders could target people who have never been convicted of anything.

“Giving the government a tool to silence anyone,” O’Brien says, “without a full court case in which they can defend themselves, would be to set a very dangerous precedent.”