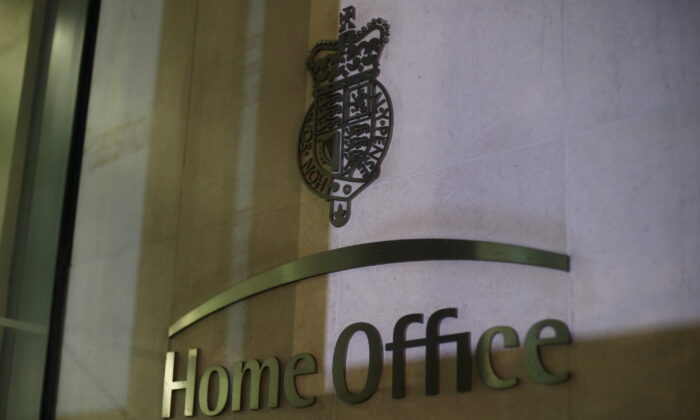 The sign outside the Home Office in Westminster, London in an undated file photo. (Yui Mok/PA)
UK

The British government is facing criticism over record-high rates of immigration as well as successful asylum applications, since it left the European Union, ended free movement, and introduced a new points-based system.

One million foreign nationals were let in to live in the UK last year for the first time in recorded history, according to new government statistics, including workers, students, and family members.

Home Office numbers released on Thursday suggest that just over a million people were granted entry to live in the UK in the twelve months leading up to March 2022 as a total of 1.6 million visas and permits were granted, of which just over 600,000 were visitor visas.

Numbers crunched from Oxford University’s Migration Observatory showed that 76 percent of asylum claims among young men aged 18–29, a group often singled out in policy discussions, were also positive in the year ending March 2022.

Of the top ten nationalities applying for asylum, half have a grant rate above 80 percent (Iran 88 percent, Eritrea 97 percent, Syria 98 percent, Afghanistan 91 percent, and Sudan 95 percent).

This is higher than at the peak of the European Migration crisis (36,546 in the year ending June 2016) and is the highest number of applications for almost two decades (since 2003).

The proportion of asylum seekers receiving a positive decision on their application reached a 30-year high in March.

Immigration was a hot topic throughout 2016’s Brexit vote, with “Take back control” a prominent slogan with voters. In 2020, Prime Minister Boris Johnson’s government ended free movement with the E.U. on a manifesto that had a commitment “to restore faith in the immigration system.”

Alp Mehmet, chairman of Migration Watch UK, told The Epoch Times by email that “illegal immigration via the Channel is out of control and the present rate of three times that of 2021 for the same period, if it continues, could mean around 85,000 by year’s end.”

He added that he believed that the points-based system, introduced at the start of 2021, lowered the qualification and pay levels, removed caps, and abandoned the requirement to look to recruit locally first.

“It effectively made it easier to recruit, with no limits, from 80 percent of the world. This is why immigration has increased and will go on increasing,” said Mehmet.

Not Many EU Citizens

In April this year, fuelled by record numbers of migrants crossing the Channel on small boats, the government signed an MOU with Rwanda to set up a new procedure for transferring asylum seekers to the east African country. Fifty people who entered the UK illegally have become the first group to be notified of the government’s intention to send them there.

Migration Observatory reported that the post-Brexit immigration system has not attracted substantial numbers of E.U. citizens in the first quarter of 2022.

Only seven percent of skilled work visa applications were from E.U. citizens, with the share “particularly low” for health and social care roles at one percent, it said.

“So far, the post-Brexit system has not attracted many E.U. citizens. The new system is much more restrictive than free movement and many low-wage roles are not eligible. But we also see low take-up of skilled work visas, which suggests that applicants are perhaps being deterred by the costs and bureaucracy these visas require,” said Madeleine Sumption, Director of the Migration Observatory at the University of Oxford, in a statement.