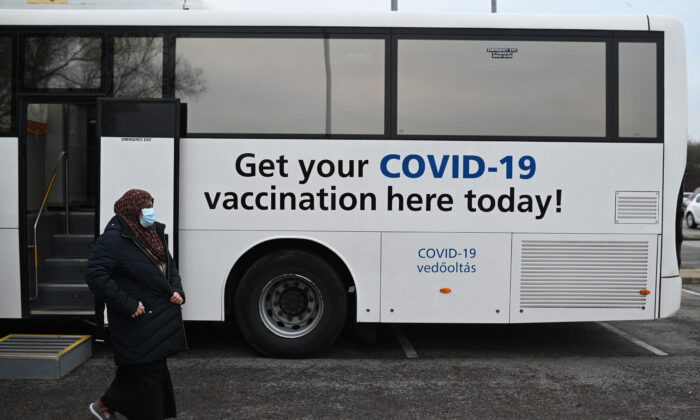 Members of the public receive their COVID-19 vaccine or booster at a NHS (National Health Service) bus outside an Asda Supermarket in the town of Farnworth, near Manchester in north-west England on Dec. 20, 2021. (Oli Scarff/AFP via Getty Images)
Viewpoints

Two weeks after having his suspension from practicing as a medical doctor overturned, Sam White and his legal team, PJH Law, have gone on the offensive. On Friday Dec. 17, they applied for undertakings from the UK’s Medical and Healthcare Products Regulatory Agency (MHRA), to withdraw the COVID vaccines within 7 days.

If it does not comply, Dr White’s team will apply for a High Court injunction without further notice to force them to do so.

The injunction is addressed to Stephen Lightfoot the Chairman of MHRA, which is an executive agency of the UK Government’s Department of Health and Social Care. It regulates medicines, medical devices, and blood components for transfusion, ensuring their safety, quality, and effectiveness. The official gov.uk website states, “the agency plays a leading role in protecting and improving public health and supports innovation through scientific research and development,” claiming it is: “Recognised globally as an authority in its field.”

Yet White believes, regarding the COVID vaccines, it has failed miserably. The full injunction application can be read here, but this is its opening paragraph: “These injections are unsafe, still in clinical trial, and should be withdrawn immediately. Your failure to investigate known concerns amounts to gross negligence in office and renders you and the executive board liable for serious misconduct in office, mal or misfeasance in public office and, or, rendering all the office holders potentially liable for corporate manslaughter in that you have been wilfully blind to the known harms of the SARS-CoV-2 injections. You have taken no action. You have a lawful duty to protect the public, and you have wilfully failed in that duty.”

PJH Law’s demands include stopping the use and advertising of all SARS-CoV-2 injections immediately and publishing the ingredients used in the vaccines, as well as the safety checks that were carried out before their distribution. This involves: “[having] the ingredients checked by independent researchers for toxicity with criminal standards of evidence gathering regarding chain of custody of the evidence.” It is also asking that PCR and Lateral Flow Testing be stopped and that ivermectin be made available for treatment.

Sensationally, its final demand is that Mr. Lightfoot makes a special Christmas evening television broadcast to the nation to confirm the undertaking, accompanied by an announcement published on the MHRA website and press-released to all media.

Because the full list of ingredients in the injections was never published, White claims patients are not able to give informed consent. He cites the Doctor’s Hippocratic Oath which includes doing no harm and not administering toxins.

The Injunction Application also criticises the Coronavirus Act which became UK law in 2020. It eased the rules on certifying death certificates meaning the doctors who sign them may have had only limited knowledge of the deceased. I first wrote about this problem in May 2021.

It is hard to discern if COVID was the dominant cause of death without a full autopsy, but the British government document, “Guidance for Doctors Completing Medical Certificates of Cause of Death in England and Wales — FOR USE DURING THE EMERGENCY PERIOD ONLY,” explains autopsies are not required for COVID cases. Instead, medical practitioners are required to certify COVID as the cause of death to the best of their knowledge and belief.

Even medical proof is not necessary under the guidance: “If before death the patient had symptoms typical of COVID- 19 infection, but the test result has not been received, it would be satisfactory to give ‘COVID-19’ as the cause of death … In the circumstances of there being no swab, it is satisfactory to apply clinical judgement.”

And the death certificate can be signed by a doctor who has not treated the patient: “In an emergency period, any doctor can complete the medical certificate of cause of death (MCCD), when it is impractical for the attending doctor to do so.”

Although doctors are supposed to record if any of these special conditions apply for possible future reappraisal, the death would still have been included in the official COVID fatalities total.

To further complicate matters, the increase in cremations rather than burials has meant post-mortems and evidence from pathological samples has also decreased. The PJH Law Injunction Application quotes a UK undertaker, John O’Looney, who has written to the Chief Coroner requesting that full inquests and post-mortems are immediately resumed as he has: “observed an increased number of deaths amongst young, previously fit and healthy, young men.”

In some cases, doctors have relied solely on the results of a PCR test to confirm COVID as the cause of death. The test was developed by Dr. Stephen Drosten and approved by the WHO, but PJH Law questions its validity and claims the original paper written by Professor Drosten was “peer reviewed and found to be academic fraud.”

PCR tests have now been largely replaced by the cheaper Lateral Flow Test (LFT), but this process too has come under criticism. Following a Freedom of Information request, the MHRA revealed: “The swabs used in the lateral flow test kits can be sterilised using either ethylene oxide or radiation.” In high doses, both are carcinogenic, but rather than the MHRA overseeing compliance, it is left to manufacturers to ensure the residue is below the allowable limit set by the international standard ISO 10993-7:2008.

The MHRA admits: “Testing on random samples of swabs by the approved body, once market approval has been given, is unusual.”

Earlier in the year, the now disgraced British health minister, Matt Hancock, was criticised for paying over $1bn to American firm Innova Medical Group for huge supplies of its Chinese-made lateral flow tests, as they were deemed to be unreliable. Yet, the National Health Service is still supplying LFT self-testing kits to the British public that are made by ACON Biotech, a company registered in China.

The British Medical Journal agrees with White and argues that the UK Government should: “urgently rethink the Lateral Flow Test rollout,” because, “the public is being misled about their accuracy.”

Trying to reverse the UK Government’s entire COVID policy and hold key people accountable, may seem quixotic, but Sam White and his team at PJH Law feel someone must hold it to account for steamrolling onto the entire population vaccines that are not properly tested, and without even letting people know what is in them.

I wonder if their efforts will inspire similar court actions in America and elsewhere?