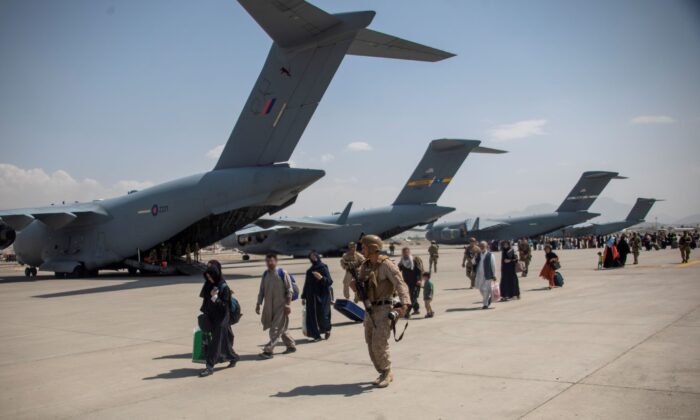 Members of the UK Armed Forces continue to take part in the evacuation of entitled personnel from Kabul airport, in Kabul, Afghanistan, on Aug. 19-22, 2021, in this picture obtained by Reuters, on Aug. 23, 2021. (LPhot Ben Shread/UK MOD Crown copyright 2021/Handout via Reuters)
UK

Britain’s withdrawal from Afghanistan last year was a “disaster” in which British soldiers and their Afghan allies were “utterly let down by deep failures of leadership” in the UK government, a Parliamentary committee has said.

In a damning report (pdf) published on May 24, the Foreign Affairs Committee of the House of Commons said the withdrawal from Afghanistan has been “a disaster in terms of planning, execution, and consequences for the UK’s wider interests.”

“It was a betrayal of our partners in the country and, worst of all, undermined the security of the United Kingdom by encouraging our enemies to act against us,” the report said.

The committee called for Sir Philip Barton, the Foreign Office’s top civil servant, to consider his position over a “determination to avoid unearthing the facts” during the committee’s inquiry into the UK government’s role in the Afghan debacle.

Barton and then-foreign secretary Dominic Raab’s failures to return from holiday as Kabul fell to the Taliban in August 2021 marked a “fundamental lack of seriousness, grip or leadership,” the report said.

Those who lead the Foreign Office should be “ashamed” that civil servants felt compelled to risk their careers to bring to light “the appalling mismanagement of the Afghan crisis,” said the MPs.

The MPs also said they are yet to hear a “plausible alternative explanation” to Prime Minister Boris Johnson approving the controversial evacuation for the Nowzad animal charity.

Tom Tugendhat, a Conservative MP who chairs the committee, said: “The UK’s part in this tragedy exposes a lack of seriousness in achieving coordination, a lack of clear decision-making, a lack of leadership, and a lack of accountability.”

He added: “We need a serious rethink in the heart of the UK government to combine diplomacy, aid, and trade in a concerted and strategic approach to future policy towards Afghanistan.”

Labour’s shadow foreign secretary David Lammy said the government had “badly let down Britain’s reputation,” adding that the individuals responsible “for this calamity should be held accountable.”

In a statement issued in response to the report, the government defended staff working “tirelessly” to evacuate more than 15,000 people from Afghanistan in a fortnight.

“This was the biggest UK mission of its kind in generations and followed months of intensive planning and collaboration between UK government departments,” a spokesman said.

“We carried out a thorough review to learn lessons from our withdrawal from Afghanistan and have drawn on many of the findings in our response to the conflict in Ukraine, including introducing new systems for managing correspondence and increasing senior oversight of our operational and diplomatic response.”