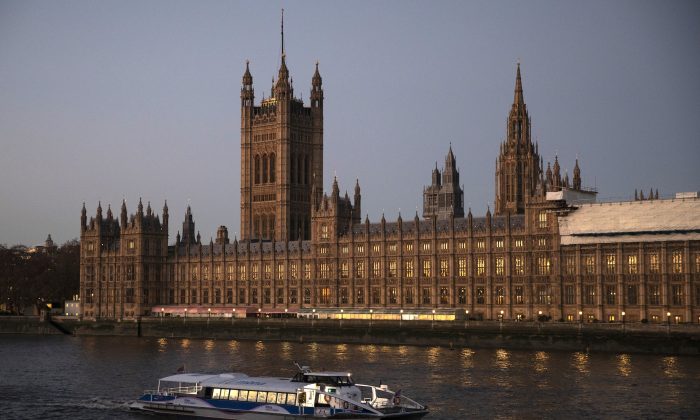 The Houses of Parliament in London on Dec. 4, 2018. (Dan Kitwood/Getty Images)
UK

LONDON—British lawmakers have opened up the road that could lead back to EU membership, wrenching the Brexit steering wheel from Theresa May’s government in a dramatic parliamentary vote.

May had given British parliamentarians only two options on Brexit: Vote for the deal she has negotiated with the EU, or reject it, condemning the UK to leave the 27-member trading bloc on March 29, 2019, with no deal.

That vote will happen Dec. 11.

On Dec. 4, however, lawmakers crowbarred a third option into the ‘Yes or No’ vote. That option allows them to steer away from the “no-deal” scenario that has spooked markets, toward a second referendum on Brexit or a “soft Brexit,” Norway-style deal.

When they voted 52-48 to leave the EU in June 2016, the British people sparked divorce talks but left the UK wedded to the EU while the terms of the settlement were negotiated. That divorce settlement was wrapped up in November but needs the approval of the British parliament, which is deeply divided over Brexit.

Fear of No Deal

May’s deal isn’t expected to pass, with lawmakers from her own Conservative Party positioned to shoot it down.

Many Brexit-supporting lawmakers can’t stomach the terms aimed to prevent a hard border between Ireland and Northern Ireland—the final sticking point in negotiations. They claim it will make the UK a “vassal state” of the EU.

But it was fear of leaving the UK with no deal that prompted some conservative lawmakers to wrangle open the door to a third option that could even result in the undoing of Brexit.

If no bespoke deal is agreed upon, the EU and UK default to World Trade Organization trade rules on March 29, 2019. That no-deal Brexit is widely seen as the worst-case economic scenario and has spooked markets in recent months.

Defending her deal, May said, “I have spent nearly two years negotiating this deal. I have lost valued colleagues. I have faced fierce criticism from all sides. If I had banged the table, walked out of the room, and delivered the same deal, some might say I had done a better job—but I didn’t play to the gallery.”

On Dec. 4, lawmakers overruled the government and agreed to an amendment that gives them more say if they reject May’s deal. The amendment creates a mechanism for parliamentarians to amend the final motion on the Brexit deal. It isn’t legally binding but carries political heft the government is unlikely to challenge.

It gives the lawmakers the change to rally a majority behind various options, including potentially demanding the government renegotiate the Brexit deal with the EU, or calling for a second referendum.

Labour backbencher Chris Leslie, who backed the amendment, said, “It was always a nonsense that MPs, after the ‘meaningful vote,’ would be somehow gagged from expressing a view. The Grieve amendment gives teeth back to the House of Commons so MPs can have some real bite.”

Lawmakers now have three days of debates before the historic Dec. 11 vote.

Political winds have been shifting behind a campaign for a second referendum, along with a change in public attitude over the last few months. Just 38 percent of people think that Britain was right to leave the EU in the latest survey, compared to 49 percent who think it was wrong.

The path of return to EU membership was also lit up by a statement on the same day from the advocate general of the European Court of Justice, who advised that the UK can back out of Brexit without the agreement of the European Union. He was giving official advice on a case brought by anti-Brexit campaigners who want to clear the legal and constitutional runway ready for a second referendum.