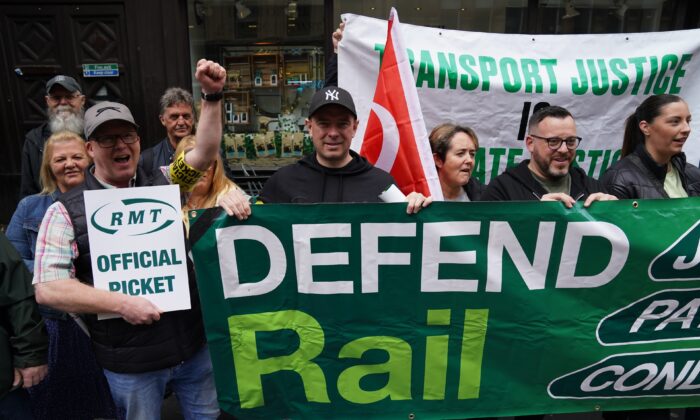 MPs voted 289 to 202 on July 11 in favour of removing the restrictions on businesses supplying temporary agency workers to cover striking staff.

The regulations were brought forward in response to the widespread chaos in Britain’s rail network in recent weeks caused by strike action by over 40,000 members of the Rail, Maritime, and Transport Workers’ union (RMT).

Business minister Jane Hunt called the restriction an “outdated blanket ban” that needs to be scrapped.

She told the Commons: “Some trade unions appear to us to be looking to create maximum disruption in a bid to stay relevant rather than constructively seeking agreement with employers and avoid conflict.”

“In light of this, the government has reviewed the current industrial relations framework and has come to the conclusion that change is needed.”

The rule change will give businesses the ability to work with specialist employment businesses to identify and bring in staff to ease disruptions to their operations, she said.

Hunt said the change “does not in any way restrict the ability of workers to go on strike,” but it gives employers “another tool they can use when trying to maintain the level of service they offer to the public.”

The country’s telecommunications network will face disruptions as workers at telecom giant BT Group (BT) have voted overwhelmingly in favour of strike action in a dispute over pay.

British Airways workers based at Heathrow have voted to strike in a dispute over pay, threatening to disrupt holidaymakers’ travel plans for the summer.

Barristers have also gone on strike in protest against “unacceptable pay and working conditions.”

Announcing the rule change on agency workers in June, Business Secretary Kwasi Kwarteng said it is “not sustainable” for trade unions to be able to hold the country “to ransom by grinding crucial public services and businesses to a halt.”

He said the new bill will “give businesses freedom to access fully skilled staff at speed, all while allowing people to get on with their lives uninterrupted to help keep the economy ticking.”

But Labour’s deputy leader Angela Rayner also said on July 11: “These proposals are anti-business and anti-worker. They will risk public safety, rip up workers’ rights, and encourage the very worst practices. And above all they will not prevent strikes, they will provoke them.”