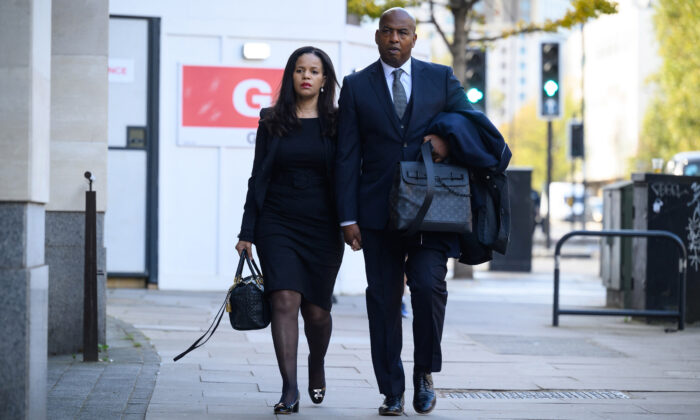 A British member of Parliament has been given a suspended jail sentence on Thursday for harassing her partner’s friend. She was subsequently expelled from the Labour Party.

Claudia Webbe, 56, was given a 10-week sentence—suspended for two years—and 200 hours of community service at Westminster Magistrates’ Court.

Webbe said she was “very disappointed” with the sentence and will appeal the court’s decision.

A Labour spokesman confirmed Webbe’s expulsion shortly after the sentence.

The MP for Leicester East was found guilty of harassment on Oct. 13.

“You were jealous of the relationship between Lester Thomas and Michelle Merritt, and probably felt in some way threatened by it,” he said.

Goldspring said Webbe “showed little remorse or contrition” and would have been jailed immediately were it not for her previous good character.

The district judge also said that he counted four occasions when Webbe referred to herself as “the victim” during her testimony from the witness box at the trial, and that he found it “odd and concerning” that the probation service report said Webbe felt like a victim herself.

Prosecutor Susannah Stevens said Webbe’s offending was “persistent … and over a prolonged period,” and caused psychological harm and distress to the victim.

Merritt told the court that Webbe made her feel vulnerable both in public and at home.

“I had many sleepless nights. I would like to feel safe again,” she said.

“Due to Ms. Webbe’s position in government [sic], I don’t know what she is capable of.”

Merritt also said she had “fallen into huge debt,” and “desperately wanted to move away from the area where” Webbe had said she knew Merritt lived.

“No woman should be threatened or harassed the way she has to me over the years, least of all a politician,” Merritt said.

Defence counsel Paul Hynes QC said Webbe, being a politician, had also been subjected to “extraordinary vilification,” including threats of violence on social media, as well as racist comments.