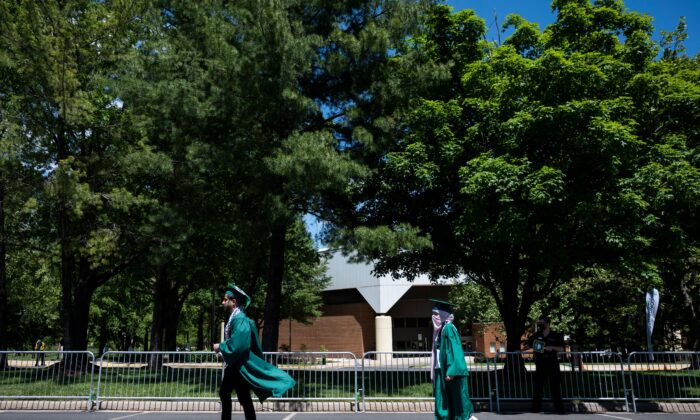 Graduates walk to the stage during a graduation ceremony at George Mason University in Fairfax, Va., on May 13, 2021. (Andrew Caballero-Reynolds/AFP via Getty Images)
UK

Britain’s Home Office launched a new visa scheme on May 30, hoping to attract the “brightest and best” from abroad who have just started their careers.

The High Potential Individual scheme, one of three new routes for obtaining a visa, is open to graduates from the world’s top 50 universities, allowing eligible individuals to enter the UK without a job offer. Applicants with a bachelor’s and master’s degree can apply for a two-year visa, and PhDs for a three-year visa.

The list also includes 20 U.S. Universities, including Harvard, Yale, and MIT. China’s Tsinghua University and Peking University also are listed. Other Universities include those in Canada, Japan, Germany, France, and Switzerland.

This visa costs £715 (about $896) plus an immigration health surcharge that allows immigrants to use the National Health (NHS.) Successful applicants are allowed to bring their families with them, including spouses and children under 18. Applicants must have a bank balance of at least £1270 (about $1593) for one month before applying for the visa.

Also, they have to pass security and criminality checks, as well as be proficient in English to at least B1 intermediate level, that is, fluent enough to communicate with native speakers.

The High Potential visa holders are permitted to work in the UK, including being self-employed and doing volunteer work, but they are not permitted to engage in professional sports, including coaching.