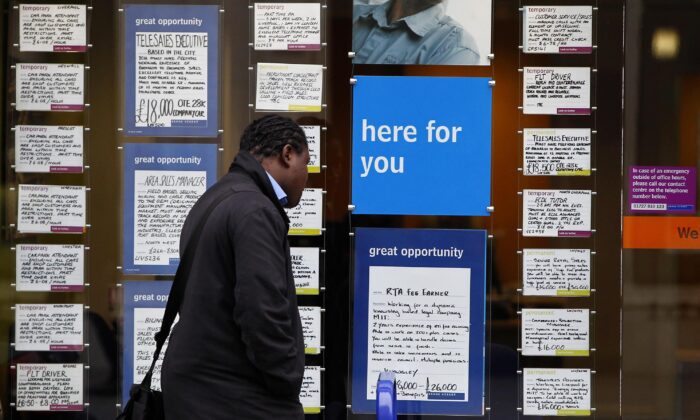 The CBI is urging the government to take urgent action to tackle the shortage of workers, warning that labour supply problems could last up to two years. Undated file photo. (Peter Byrne/PA)
UK

The UK could suffer two more years of labour shortages due to the twin effects of the CCP (Chinese Communist Party) virus pandemic and Brexit, the Confederation of British Industry (CBI) has warned.

“Labour shortages are biting right across the economy,” said Tony Danker, the CBI’s director-general. “These shortages are already affecting business operations and will have a negative impact on the UK’s economic recovery.”

The CBI said it has heard from companies actively cutting capacity because they cannot meet demand. Some hoteliers are limiting the number of bookable rooms because they do not have enough housekeeping staff and cannot get linen laundered. Some restaurant owners have had to choose between lunchtime and evening services when trying to make the most of summer.

Danker said businesses have done their best to tackle the problem, but it will not solve it in the near term.

“Businesses are already spending significant amounts on training, but that takes time to yield results, and some members suggest it could take two years rather than a couple of months for labour shortages to be fully eliminated,” he said.

There have been expectations that the labour shortages will be eased when the Job Retention Scheme, also known as furlough, ends on Sept. 30, 2021.

But Danker said the end of the furlough scheme will not solve the problem and “standing firm and waiting for shortages to solve themselves is not the way to run an economy.”

“In the UK, many overseas workers left during the pandemic affecting sectors including hospitality, logistics, and food processing. And new immigration rules make replacing those who left more complex,” he said.

Since the UK left the EU’s single market in January, workers from European Union member states can no longer work in the UK without visas.

This has reduced the incentive to work in the UK, especially when job vacancies are also increasing in other European countries as their economies bounce back.

The CBI said the government could “make a real difference” by placing drivers, welders, butchers, and bricklayers on the Shortage Occupation List.

“The government promised an immigration system that would focus on the skills we need rather than unrestrained access to overseas labour. Yet here we have obvious and short-term skilled need but a system that can’t seem to respond,” said Danker.

But the government insisted that businesses should not rely on foreign labour.

A government spokesman said: “We want to see employers make long-term investments in the UK domestic workforce instead of relying on labour from abroad. Our Plan for Jobs is helping people across the country retrain, build new skills, and get back into work.”