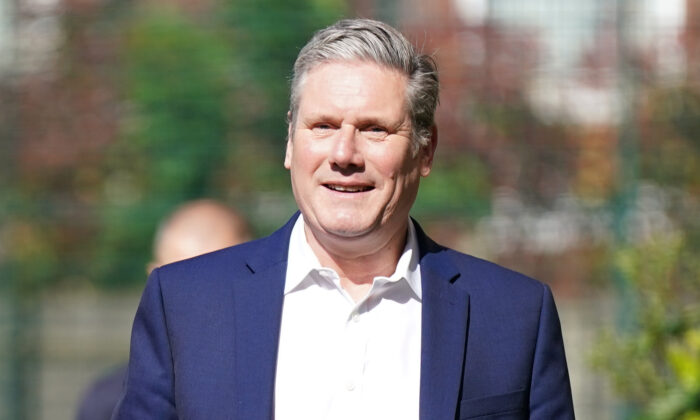 The force previously said it did not believe the Labour leader broke any rules in the so-called “beergate” affair but said it had reviewed the conclusion in light of “significant new information” without specifying what the information is.

Amid the “partygate” allegations that a number of rule-breaking gatherings occurred in the centre of the Conservative government during the CCP (Chinese Communist Party) virus lockdowns, it emerged in January that Starmer was pictured having a beer in the office of Mary Foy, Labour MP for the City of Durham, at around 10 p.m. on April 30, 2021, when indoor mixing between households was banned under CCP virus rules.

The rules at the time—introduced by the Conservative government and passed Parliament with the support of Labour and other parties—stipulated that colleagues can “gather in larger groups or meet indoors where it is necessary for your work,” adding, “This does not include social gatherings with work colleagues.”

Starmer said the team was working late on an election campaign and had to order takeaway before resuming work as restaurants were closed.

Durham Constabulary cleared Starmer and his team in February but said on Wednesday that it was considering the case after receiving “a number of recent communications.”

It was revealed last week that Conservative MP Richard Holden had written to Durham police on April 22 asking it to re-examine the case, 10 days after the Metropolitan Police issued fines to Prime Minister Boris Johnson, his wife Carrie Johnson, Chancellor of the Exchequer Rishi Sunak, and others earlier over a birthday get-together for Johnson ahead of a Cabinet meeting on June 19, 2020.

In a statement on Friday, a spokesman for Durham Constabulary said: “Earlier this year, Durham Constabulary carried out an assessment as to whether COVID-19 regulations had been breached at a gathering in Durham City on April 30, 2021. At that time, it was concluded that no offence had been established and therefore no further action would be taken.

“Following the receipt of significant new information over recent days, Durham Constabulary has reviewed that position,” the spokesman said, adding that as the local elections on May 5 had concluded, the force “can confirm that an investigation into potential breaches of COVID-19 regulations relating to this gathering is now being conducted.”

Labour said it’s “obviously happy to answer any questions there are” but remains “clear that no rules were broken.”

Labour previously said Deputy Leader Angela Rayner was not present at the event in Durham, but Starmer confirmed on Sunday that Rayner was present, saying his party made a “genuine mistake.”