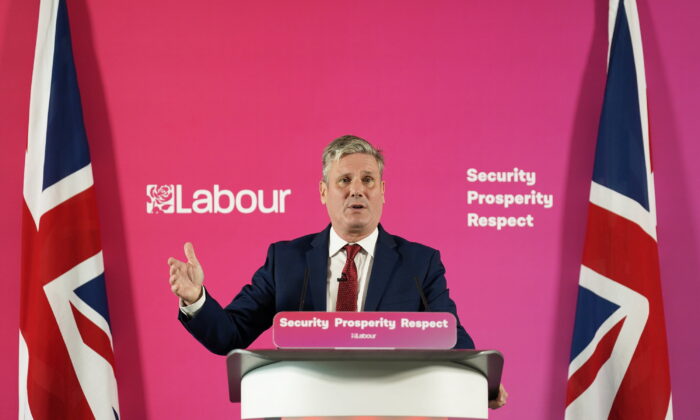 Britain’s main opposition Labour Party has announced plans to freeze household energy bills, which it said would be paid for in part by an extension of a windfall tax on oil and gas companies.

Talking to the BBC on Aug. 15, Starmer said that action is needed when millions of families are struggling to pay their energy bills.

“We have a choice and this is really the political choice of the day. We either allow oil and gas companies to go on making huge profits, which is what’s happening at the moment, or we do something about it,” he said.

In order to pay for the measures, Labour said it would close a “loophole” in the windfall levy announced by the Conservative government in May, and backdate the start to January, which together with rising global prices would bring in £8 billion ($9.6 billion).

In addition, £14 billion ($17 billion) would come from dropping the government’s £400 household energy rebate, and abandoning pledges made by the Tory leadership contenders, such as halting the “green levy” or scrapping VAT on domestic fuel bills.

The party also said freezing fuel prices would keep inflation down and reduce the government’s debt interest payments by another £7 billion ($8.5 billion).

But the independent Institute for Fiscal Studies (IFS) said Labour’s plan is a “very expensive scheme.”

IFS Director Paul Johnson said that the cost of freezing energy prices would be equivalent to the eye-watering cost of the furlough scheme, which paid up to 80 percent of the usual wages of employees who could not work during the COVID-19 lockdowns.

He told the BBC that it would be “true this year” that this would bring down inflation and interest on government debt payments, but warned the average rate of inflation would not change over time assuming it was only a temporary subsidy, “so that’s not a real saving” in the long run.

In response, Starmer stressed that the IFS “isn’t disputing” that the Labour plan will reduce inflation.

Asked about the potential length of the freeze, he said the situation would have to be assessed in April according to the forecasts.

Starmer rejected calls to nationalise energy firms, arguing that “every single penny” should go to reducing the energy bills rather than compensating shareholders.