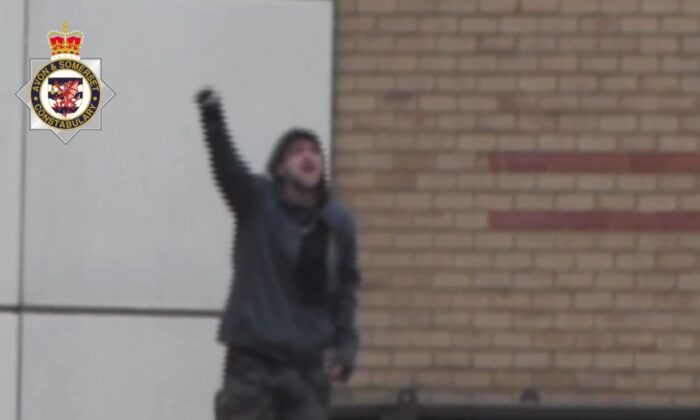 CCTV footage of Ryan Roberts during the riot on March 21, 2021. (Avon and Somerset Police/PA)
UK

A British protester has been convicted of trying to endanger the life of a police officer by torching a van during the riot that followed the “Kill the Bill” demonstrations in Bristol last spring.

Ryan Roberts, 25, led chants of “ACAB: All cops are [expletive]s” outside Bridewell police station on the afternoon of March 21 before throwing cans, bottles and placards at officers.

During his trial at Bristol Crown Court, the jury heard Roberts verbally abused and repeatedly kicked officers, before smashing in the windows of the police station.

Footage from the riot showed Roberts pushing pieces of flaming cardboard under two police vans, and placing industrial bins around an already partially burnt-out police car and setting them alight.

He told an officer inside one of the vans he would “go bang”, it was claimed.

Roberts then smashed in the windows of a mobile police station and encouraged the crowd to help roll it over, before setting light to the cab while hundreds of people were close by.

Two alternative counts of attempted arson were left to lie on the court file, while Roberts was further convicted of arson being reckless as to whether life was endangered for setting light to the police car.

Roberts was found guilty of riot, while he was convicted of one count of arson being reckless as to whether life was endangered in respect of the torching of a mobile police station by a majority verdict of 10 to two.

In his evidence, Roberts said he got “carried away” fighting for freedom of speech.

The afternoon began with a protest against the Police, Crime, Sentencing and Courts Bill which is going through Parliament.

Roberts told the court the Bill aimed to “ban peaceful protest altogether”, saying the demo “was more about freedom of speech”.

He said the mood of the protest changed when police donned riot gear as night fell.

The defendant said officers started pushing the crowd back to create “a sterile environment” around Bridewell police station.

“I hadn’t seen the crowd doing anything before that point,” Roberts added.

He said police started “pushing, shoving and hitting” the crowd with shields and batons.

“I was fighting for a cause I felt strongly about,” Roberts said.

Asked about footage of him apparently kicking a police officer’s shield and smashing the windows of the police station, Roberts replied: “I was just getting carried away in the moment.”

Forty-four officers were injured in the riot, which died down in the early hours of March 22.

Roberts will be sentenced on a date yet to be set.

Those protests against the Bill were carried out under the slogan “kill the bill”, which was criticised over the fact that “the bill” is commonly used to mean the police in the UK.