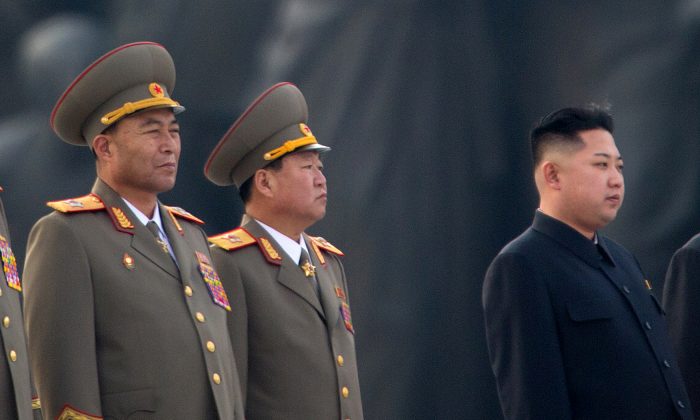 Johnson stressed his wish for a diplomatic solution to North Korea’s growing nuclear ambitions, but said that the possibility of military action “clearly must remain on the table.”

Johnson did not rule out British support of a pre-emptive nuclear strike when asked, following a speech at the international think-tank, Chatham House, on 23 Oct. during which he heaped praise on the protection offered by the American nuclear deterrent.

British Prime Minister Theresa May has previously also refused to rule out the possibility of British intervention, and the British military has reportedly been planning for military action in North Korea.

Johnson said that North Korean dictator Kim Jong Un was on the way to acquiring the capability to “make good his threat” to reduce New York to “ashes.”

“I am afraid that the U.S. President—whoever he or she might be—will have an absolute duty to prepare any option to keep safe not only the American people but all those who have sheltered under the American nuclear umbrella,” he said.

The “American offer” and guarantee of safety under its nuclear umbrella is one of the “greatest contributions” to the “unprecedented epoch of peace and prosperity that we have all been living through,” he said.

The rogue regime has carried out 19 missile tests in the last year, and 6 nuclear tests in total, noted Johnson.

Along with missile tests, the communist dictator has ramped up rhetoric against the United States and its allies in recent months, threatening to shoot down U.S. bombers in international airspace and to “sink Japan into the sea” with nuclear bombs.

President Trump has ordered his most senior military officials to draw up detailed military options for an armed conflict with North Korea.

Trump has said that while the United States has patience, if it is forced to defend itself or its allies against North Korea, it could completely destroy the country.

The British Foreign Secretary compared the current situation to the Cold war. “The public can be forgiven for genuinely starting to wonder whether the nuclear sword of Damocles is once again held over the head of a trembling human race.”

“I don’t think anybody can conceivably want a military solution to this problem, and I know many who have studied the matter find it hard to see how the military solution might play out,” he said in his speech, posted on Chatham House’s Facebook page.

“I hope Kim will also consider this: that if his objective is to intimidate the US into wholesale withdrawal from East Asia, then it strikes me that his current course might almost be designed to produce the opposite effect,” he added. “A new generation has grown up with no memory of the threat of a nuclear winter, and little education in the appalling logic of mutually assured destruction. The memory of Hiroshima and Nagasaki is now literally fading from living memory.”

Johnson described the nuclear non-proliferation treaty as “one of the great diplomatic achievements” of the last century. “It has stood the test of time. It is the job of our generation to preserve that agreement, and British diplomacy will be at the forefront of the endeavor.”

The British Prime Minister on Monday, agreed together with the Japanese Prime Minister, to continue to work with the international community to maintain pressure on the North Korean regime to cease its destabilising activity.