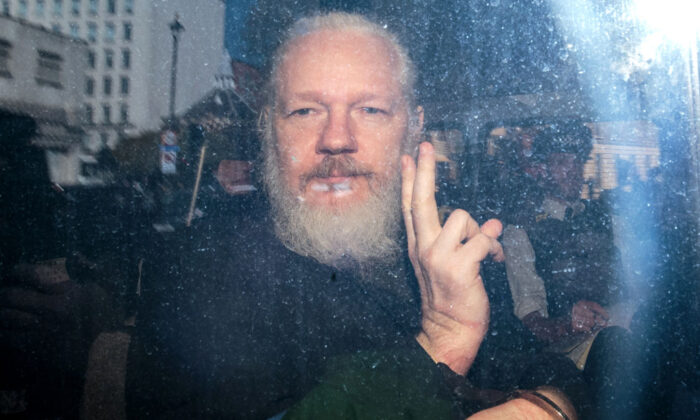 Julian Assange gestures to the media from a police vehicle on his arrival at Westminster Magistrates' Court in London on April 11, 2019. (Jack Taylor/Getty Images)
UK

UK Judge to Rule on US Extradition for WikiLeaks’ Assange

LONDON—WikiLeaks founder Julian Assange will find out Monday whether he can be extradited from the UK to the United States to face espionage charges over the publication of secret American military documents.

District Judge Vanessa Baraitser is due to deliver her decision at London’s Old Bailey courthouse at 10 a.m. Monday. If she grants the request, then Britain’s home secretary, Priti Patel, would make the final decision.

Whichever side loses is expected to appeal, which could lead to years more legal wrangling.

However, there’s a possibility that outside forces may come into play that could instantly end the decade-long saga.

Stella Moris, Assange’s partner and the mother of his two sons, has appealed to U.S. President Donald Trump via Twitter to grant a pardon to Assange before Jan. 20, when he may leave office.

U.S. prosecutors indicted the 49-year-old Assange on 17 espionage charges and one charge of computer misuse that carry a maximum sentence of 175 years in prison.

Lawyers acting on behalf of the U.S. government said in their closing arguments after the four-week hearing in the fall that Assange’s defense team had raised issues that were neither relevant nor admissible.

Assange’s defense team argued that he is entitled to First Amendment protections for the publication of leaked documents that exposed U.S. military wrongdoing in Iraq and Afghanistan and that the U.S. extradition request was politically motivated.

In their written closing arguments, Assange’s legal team accused the United States of an “extraordinary, unprecedented and politicized” prosecution that constitutes “a flagrant denial of his right to freedom of expression and poses a fundamental threat to the freedom of the press throughout the world.”

Defense lawyers also said Assange was suffering from wide-ranging mental health issues, including suicidal tendencies, that could be exacerbated if he is placed in inhospitable prison conditions in the United States.

They said his mental health deteriorated while he took asylum inside the Ecuadorian Embassy in London for years and that he was diagnosed with an autism spectrum disorder. Assange jumped bail in 2012 when he sought asylum at the embassy, where he stayed for seven years before being evicted and arrested. He has been held at Belmarsh prison in London since April 2019.

His legal team argued that Assange would, if extradited, likely face solitary confinement that would put him at a heightened risk of suicide. They said if he was subsequently convicted, he would probably be sent to the notorious ADX Supermax prison in Colorado, which is also inhabited by Unabomber Ted Kaczynski and Mexican drug lord Joaquin “El Chapo” Guzman.

Lawyers for the U.S. government argued that Assange’s mental state “is patently not so severe so as to preclude extradition.”

Assange has attracted the support of high-profile figures, including the dissident Chinese artist Ai Weiwei and actress Pamela Anderson.

Daniel Ellsberg, the famous U.S. whistleblower, also came out in support, telling the hearing that they had “very comparable political opinions.”

The 89-year-old, widely credited for helping to bring about an end to the Vietnam War through his leaking of the Pentagon Papers in 1971, said the American public “needed urgently to know what was being done routinely in their name, and there was no other way for them to learn it than by unauthorized disclosure.”

There are clear echoes between Assange and Ellsberg, who leaked over 7,000 pages of classified documents to the press, including The New York Times and The Washington Post. Ellsberg was subsequently put on trial for 12 charges in connection with violations of the Espionage Act, which were punishable by up to 115 years in prison. The charges were dismissed in 1973 because of government misconduct against him.

Assange and his legal team will be hoping that developments in the United States bring an end to his ordeal if the judge grants the U.S. extradition request.