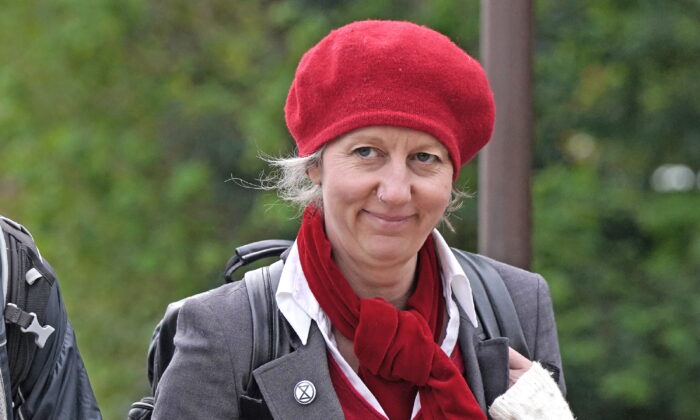 A London court has delayed the trial of a prominent climate activist, saying it can’t go ahead until legal questions that arose from the statue-toppling case in Bristol are resolved.

Gail Bradbrook, the co-founder of the climate activist group Extinction Rebellion, appeared at Isleworth Crown Court on Tuesday accused of causing £27,500 ($35,746) in damage to the Department for Transport building in Westminster by smashing a plate-glass window during a protest in London on Oct. 15, 2019.

The trial of the 49-year-old—initially due to start on Monday—is now delayed until Nov. 21, and Bradbrook has been released on unconditional bail to return to Isleworth Crown Court for the five-day trial.

Delaying the trial, Judge Martin Edmunds said, “The trial, which is listed today, can’t go ahead because the attorney general has referred to the Court of Appeal the legal questions that arose from the Bristol case.”

Edmunds was referring to a case in which four Black Lives Matter activists were acquitted of causing criminal damage by a jury despite having acknowledged their involvement in toppling the statue of 17th-century slave trader Edward Colston as jurors were told to balance the defendants’ human rights against the legislation contained within the Criminal Damage Act.

On April 13, Attorney General Suella Braverman said she would ask the Court of Appeal to “clarify the law around protests” as the Bristol case had  “led to uncertainty regarding the interaction between the offence of criminal damage and the rights relevant to protest peacefully.”

The “Colston Four”—Milo Ponsford, 25, Jake Skuse, 36, Sage Willoughby, 21, and Rhian Graham, 29, were acquitted of causing criminal damage on Jan. 5 after they admitted to toppling the statue during a Black Lives Matter protest in June 2020.

The trial heard that Ponsford and Graham brought ropes, which Willoughby passed around the statue’s neck, and Skuse goaded the crowd into rolling the statue 500 meters (1,640 feet) and throwing it into the water.

But the four claimed that the presence of Colston’s statue was a hate crime or an indecent display and that the tearing-down of the statue was to prevent a crime.

According to the Bristol government’s museum’s website, Colston, a 17th-century merchant and philanthropist, profited from his shares in the Royal African Company (RAC), in which members traded gold, ivory, and enslaved Africans. He had also been an active member of RAC’s governing body for 11 years.

Direction jurors, Judge Peter Blair QC said they had to balance the defendants’ human rights against the legislation contained within the Criminal Damage Act.

“These rights protect not only beliefs, such as anti-racism, and speech itself, but also actions associated with protest,” Judge Blair said.

“Even where those actions have more than a minimal impact on the rights of other people, they need not result in a conviction. It is all a matter of fact and degree.”

He said limitations on human rights are permitted under laws including the Criminal Damage Act if it is “in the interests of public safety or for the protection of the rights and freedoms of others.”

The issue of human rights was the last question in the “route to verdict.”

The jury was asked if it was sure a conviction for criminal damage would be “a proportionate interference” with the defendants’ “rights to freedom of thought and conscience, and to freedom of expression.”

Jurors were told that if they were sure the answer was “yes,” the verdict should be guilty, and if “no,” it should be not guilty.

While a review will not affect the outcome of the case, the attorney general clarification will be sought on whether someone can use a defence related to their human rights when they’re accused of criminal damage and whether juries should be asked to decide if a conviction for criminal damage is a “proportionate interference” with the human rights of the accused, particularly the right to protest and freedom of expression, as the judge did in the Colston statue case.