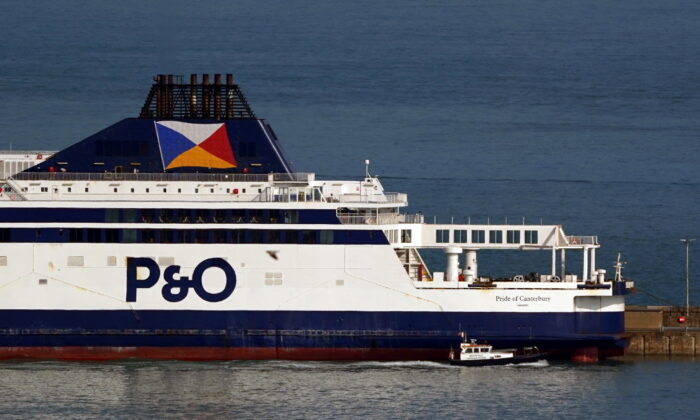 A P&O ferry remains moored at the Port of Dover in Kent, southeast England, in an undated file photo. (Gareth Fuller/PA)
UK

The UK government has issued an ultimatum to P&O Ferries, saying it has “one further opportunity” to reinstate the 800 British workers who were fired without notice.

Transport Secretary Grant Shapps said on Monday that he will bring a “comprehensive package of measures” to Parliament to ensure that seafarers are protected.

In a letter to P&O Chief Executive Peter Hebblethwaite, Shapps wrote, “Through that package, I intend to block the outcome that P&O Ferries has pursued, including paying workers less than the minimum wage.”

My letter to P&O boss makes clear that this government will not stand by while the requirement to treat seafarers with due respect and fairness is brazenly ignored. pic.twitter.com/4ozBsydJPC

P&O Ferries, which was bought by Dubai-based logistics giant DP World in 2019, sparked outrage on March 17 when it fired 800 seafarers without any prior notice and replaced them with cheaper agency workers, citing £100 million ($132 million) year-on-year loss.

At a parliamentary hearing last week, Hebblethwaite acknowledged that the company knowingly broke the law by deciding not to consult the unions because “no union could accept it.”

Hebblethwaite said the new crews are being paid an average hourly wage of £5.50 ($7.25), lower than the UK’s minimum wage of £8.91 ($11.74) apart from on domestic routes, but said it is allowed under international maritime rules.

Prime Minister Boris Johnson told Parliament on March 23 that the government will make sure “everybody working in the UK exclusive economic zone gets paid the living wage and we’ll do it as fast as we possibly can.”

In his letter, Shapps told Hebblethwaite he has “one further opportunity” to reinstate the sacked workers on their previous wages.

“Given that we intend to ensure such outcomes are prevented by laws, which we will ensure that you cannot simply choose to ignore, I believe you will be left with little choice but to reverse your decision in any case,” he wrote.

Shapps reiterated his call for Hebblethwaite to resign, accusing him of “contempt for workers” and describing his position as “untenable.”

Meanwhile, the Maritime and Coastguard Agency (MCA) said it is inspecting the P&O Ferries ship Pride of Kent at the Port of Dover to ensure it is safe to go to sea with its new crew, even without passengers or cargo.

A full inspection would be required at a later date before it could resume commercial operations.

The MCA said another of the firm’s vessels, European Causeway, remains under detention in Larne, Northern Ireland after “failures on crew familiarisation, vessel documentation, and crew training” were discovered.