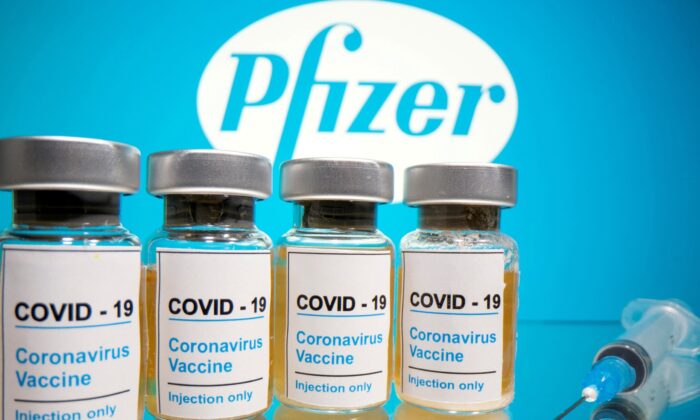 Vials of the CCP virus vaccine and a medical syringe are seen in front of a displayed Pfizer logo on Oct. 31, 2020. (Dado Ruvic/Reuters)
UK

Britain’s medicine regulator has warned that people with “a significant history of allergic reactions” shouldn’t receive the Pfizer/BioNTech vaccine against the CCP virus, after two people fell ill after getting the jab.

An MHRA spokesperson said the regulator is “fully investigating” the two cases “as a matter of priority.”

“Once all the information has been reviewed we will communicate updated advice,” the spokesperson said in a statement emailed to The Epoch Times.

“In line with existing advice we advise anyone with a history of a significant allergic reaction due to receive the Pfizer COVID vaccine to speak to your healthcare professional who is administering the vaccine.”

Pfizer said it had been informed by the MHRA of “two yellow card reports that may be associated with allergic reaction” to the vaccine.

“As a precautionary measure, the MHRA has issued temporary guidance to the NHS while it conducts an investigation in order to fully understand each case and its causes. Pfizer and BioNTech are supporting the MHRA in the investigation,” the company said in a statement emailed to The Epoch Times.

“In the pivotal phase 3 clinical trial, this vaccine was generally well tolerated with no serious safety concerns reported by the independent Data Monitoring Committee,” it said. “The trial has enrolled over 44,000 participants to date, over 42,000 of whom have received a second vaccination.”

British Prime Minister Boris Johnson on Tuesday hailed the UK’s vaccine roll-out as a “huge step forward” in the fight against the CCP virus, which caused the COVID-19 pandemic. Health Secretary Matt Hancock said the day would be remembered as “V-day” in Britain’s fight against the pandemic.

The UK approved the Pfizer/BioNTech vaccine on Dec. 2, becoming the first country in the world to do so.

Dr. Anthony Fauci, America’s top infectious disease expert, also said UK regulators had not acted “as carefully” as the U.S. Food and Drug Administration, though he later apologised and said he had “great faith” in Britain’s scientific and regulatory communities.