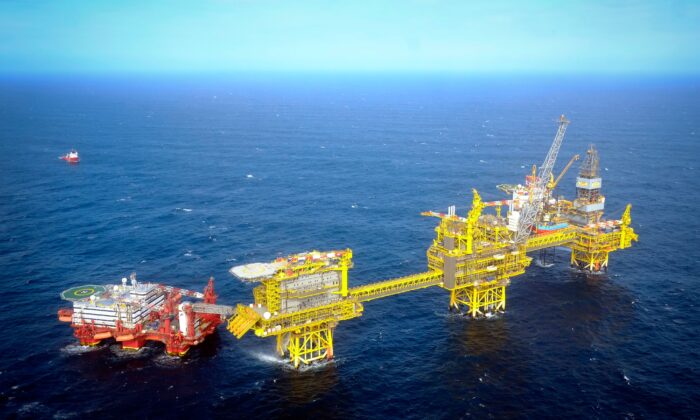 The Total Culzean platform is pictured on the North Sea, about 45 miles (70 kilometres) east of the Aberdeen, Scotland's northeast coast, on April 8, 2019. (Andy Buchanan/AFP via Getty Images)
UK

The UK used more gas from Norway than it did from the North Sea in 2021, after gas production within the UK fell “significantly” last year.

Ross Dornan of industry body Offshore Energies UK (OEUK) said this marked the first time that supplies from a single other country had been larger than domestic supply.

And with the Russian invasion of Ukraine resulting in countries looking to end their use of oil and gas from Russia, Dornan warned: “If we want to be more reliant on imports we’re going to have to pay the price of that.”

His comments came as a new report from OEUK found that by 2030 about 80% of UK gas supplies and more than 70% of oil supplies will have to come from other countries if there is no new investment in the North Sea.

Within the UK “production of oil and gas will fall by up to 15% a year unless there is rapid investment in new infrastructure,” the report found.

It added: “This decline is much faster than the predicted reduction in UK energy demand, so, if there is no such investment then, by 2030, we will be reliant on other countries for around 80% of our gas and 70% of our oil.”

Last year the UK consumed 76 billion cubic metres (bcm) of gas – with 32 bcm of this coming from Norway while 29 bcm came from the UK continental shelf.

That comes after investment in the oil and gas sector has fallen from about £16 billion a year in 2014 to £5.5 billion in 2019 and a predicted £4 billion this year, OEUK said.

Dornan, OEUK’s market intelligence manager, said: “The energy gap between what we produce ourselves and that which comes from other nations will keep growing unless we invest in exploration and production on the UK’s continental shelf.

“We must also accelerate the development of cleaner energy like hydrogen. Investment now will give us energy security in the years to come.”

He added that the “emissions generated by processing and transporting our own oil and gas are much lower than for imports”.

Dornan explained the “main reason” for Norway now being the UK’s largest gas supplier was “the decline from our domestic production”, saying this dropped “significantly last year”.

He added: “It is really important, it means the largest source of gas coming into the UK is no loner within the control of companies working in the UK, of the UK Government, of the UK regulators, of the UK industry.

“We are as reliant on the performance of Norwegian assets now for our gas supplies as we are on the UK’s gas infrastructure.

“We are in a fortunate position where we have good diversity of supply … but in the context of countries moving away from Russian supply, which is 40% of the Continent’s gas sources, those international sources are going to be more competitive than they have been.

“And if we want to be more reliant on imports we’re going to have to pay the price of that.”

In these circumstances, he stated: “The best thing we can still do is invest in our domestic resource so we can try to maintain that balance, we can tip the balance potentially back towards UK gas being our biggest source.”

Scottish Green economy spokeswoman and North East Scotland MSP Maggie Chapman said: “The oil and gas industry spent decades denying the climate crisis, and now they are simply ignoring it by attempting to double down on fossil fuel extraction.

“The UK Government should slap a windfall tax on the huge profits of these energy giants, not give them carte blanche to continue wrecking the planet and fleecing their customers.

“Rather than invest in more oil and gas that funding should be directed to develop Scotland’s huge renewable energy potential and focus on reducing demand through retrofitting and insulation schemes, which are the best ways to secure our energy supply and keep household costs down.”

A UK Government spokesman said: “Energy security is our absolute priority. This is why, as part of our North Sea Transition Deal, we have committed joint investment with industry of up to £16 billion by 2030 to maintain security of supply while boosting hydrogen production, carbon capture and other technologies to cut emissions.

“We cannot turn off North Sea oil and gas overnight as doing so would put energy security, British jobs and industries at risk, and we would be even more dependent on foreign imports.

“Our energy supply strategy will look at all options to bolster the UK’s energy security for the long term, by continuing to back our vital North Sea oil and gas sector while ​at the same time supercharging our renewable energy and nuclear capacity.”