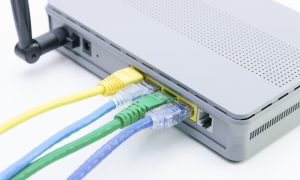 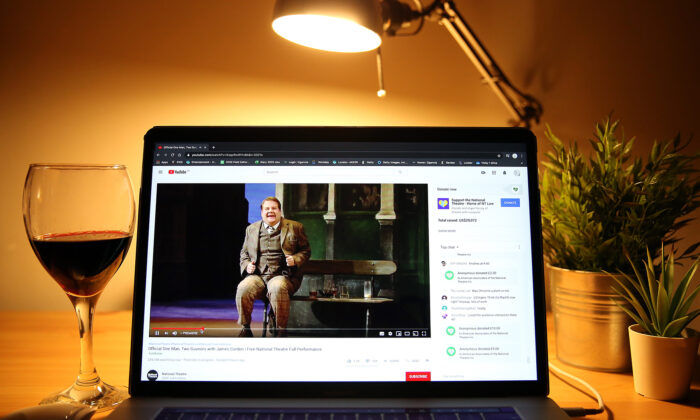 In this photo illustration, James Corden is seen on the screen of a laptop streaming "One Man, Two Guvnors" during a "National Theatre at Home" broadcast in London on April 2, 2020. (Simone Joyner/Getty Images)
UK

Broadband usage in 2020 has more than doubled compared to the previous year, according to the UK’s largest broadband network.

Data released on Dec. 29 by the network Openreach, whose customers include BT, Plusnet, Sky, TalkTalk, Vodafone, and Zen, shows that 50,000 petabytes (PB) of data has been consumed in the UK this year, more than double the amount used in 2019 (22,000 PB). One PB is 1 million gigabytes (GB).

The network said the increased amount of homeworking, video conferencing, live-streaming of sports events, and gaming during the CCP (Chinese Communist Party) virus pandemic are likely what drove up broadband usage.

“It’s been a year unlike any other and we believe that’s played a major part in this huge jump in data consumption,” Colin Lees, chief technology and information officer of Openreach, said in a statement.

“We know more businesses asked their employees to work from home throughout most of 2020, so connecting remotely has been and continues to be important for everyone,” he added.

On average, every property connected to Openreach’s fibre networks used around 9 GB per day—the equivalent to two or three HD movies being streamed in every house in the UK every day.

The record for daily usage has also been broken this year—15 times—with the latest record being set on Boxing Day, when internet users consumed 210 PB across Openreach’s fibre networks.

The network said that the contributing factors included video calls to families and friends, Netflix and live sport streaming, and gaming console downloads.

Due to a surge of CCP virus cases in England, a large part of the country has been put under tier four restrictions, meaning people couldn’t visit their families and friends during Christmas.

In March, daytime broadband usage quickly jumped up by 30 percent after the lockdown started, due to an increase in home working and homeschooling.

However, home working and homeschooling doesn’t seem to be the biggest contributor, as the busiest days are still on the weekend, and the busiest time of the day tends to be between 7 p.m. and 10 p.m.

Online gaming contributed to the increase in data usage, especially when updates were available to popular PlayStation, PC, and Xbox games, such as “Call of Duty” and “Fortnite.”