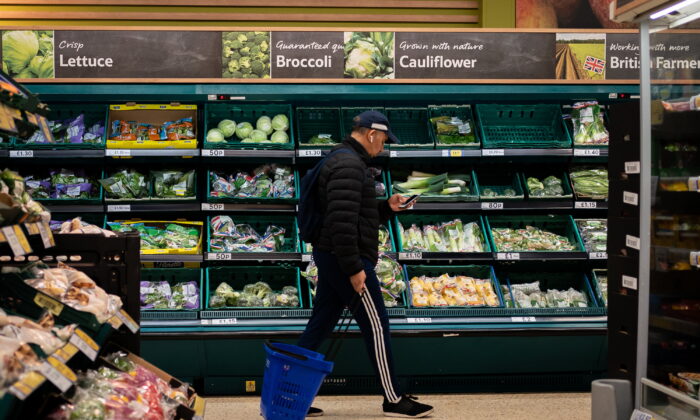 A man in a British supermarket in an undated file photo. (Aaron Chown/PA)
UK

Rampant price rises in the UK have sent inflation rates to a new 30-year high, further adding to the pressure on British households.

The Consumer Price Index (CPI) rose to 6.2 percent in February 2022 from 5.5 percent in January 2022, according to the latest figures released by the Office for National Statistics (ONS) on March 23.

This is the highest inflation rate since March 1992, when it stood at 7.1 percent.

A wide range of prices contributed to the CPI rise, with the most significant rises seen in recreation and culture sectors as well as clothing and footwear.

ONS Chief Economist Grant Fitzner said: “Inflation rose steeply in February as prices increased for a wide range of goods and services, for products as diverse as food to toys and games.

“Clothing and footwear saw a return to traditional February price rises after last year’s falls when many shops were closed. Furniture and flooring also contributed to the rise in inflation as prices started to recover following New Year sales.”

The ONS said inflation rose across 10 out of the 12 categories that feed into the index, with only communication and education not seeing increases.

Experts have warned that prices will rise further still as the Ukraine conflict pushes up already sky-high inflation, adding to painful price rises for energy, fuel, commodities, and food.

To stop soaring inflation from becoming ingrained in the British economy, the Bank of England last week raised interest rates from 0.5 percent to 0.75 percent, the third rate rise since mid-December.

The central bank warned inflation will now peak at around 8 percent in April, and could hit double-digits if wholesale energy prices continue to soar.

In April, Britain’s energy regulator Ofgem will hike the energy price cap by 54 percent. Given the impact of the war in Ukraine on gas prices, a further increase is expected in October, possibly by as much as another 50 percent.

Samuel Tombs at Pantheon Macroeconomics said the Bank of England will likely raise rates to 1 percent in May to try and rein in rampant inflation.

He said the economic recovery is “likely to slow sharply as households feel the pinch” later this year.