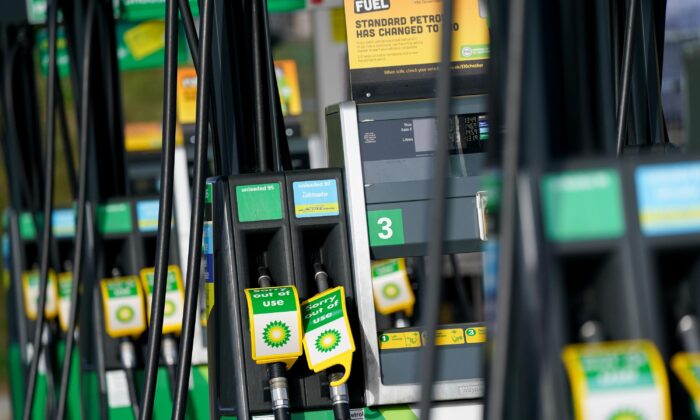 UK inflation has hit its highest level for more than a decade as supply chain disruption and record fuel prices have sent the cost of living soaring, according to official figures. (Jacob King/PA)
UK

UK Inflation Hits Highest Level for Over a Decade

The cost of living in the UK rose by 5.1 percent in the 12 months to November, the highest in more than a decade, latest statistics show.

According to data released on Wednesday by the Office for National Statistics (ONS), the Consumer Prices Index (CPI) rose by 5.1 percent in the 12 months to November 2021, up from 4.2 percent in October.

It is the first time that CPI has breached 5 percent for more than a decade and sees inflation remain more than double the Bank of England’s 2 percent target.

ONS chief economist Grant Fitzner said: “A wide range of price rises contributed to another steep rise in inflation, which now stands at its highest rate for over a decade.”

“The price of fuel increased notably, pushing average petrol prices higher than we have seen before,” he said. “Clothing costs—which increased after falling this time last year—along with price rises for food, second-hand cars, and increased tobacco duty all helped drive up inflation this month.”

Chancellor Rishi Sunak said: “We know how challenging rising inflation can be for families and households, which is why we’re spending £4.2 billion ($5.6 billion) to support living standards and provide targeted measures for the most vulnerable over the winter months.”

But the main opposition Labour party claimed the government is not doing enough to tackle inflation.

Shadow chief secretary to the Treasury Pat McFadden said: “These figures are a stark illustration of the cost-of-living crisis facing families this Christmas. Instead of taking action, the government are looking the other way, blaming ‘global problems’ while they trap us in a high-tax, low-growth cycle.”

The data puts further pressure on the Bank of England ahead of its interest rate meeting on Thursday, with policymakers having to weigh up the need to rein in rampant inflation but also to support growth after new COVID-19 restrictions were imposed to slow the spread of the Omicron variant.

Economist Samuel Tombs, at Pantheon Macroeconomics, said he believes that rate-setters will still hold fire this week despite the “uncomfortably high” inflation rate, because “the full extent of the economic damage wrought by Omicron is still unknown.”