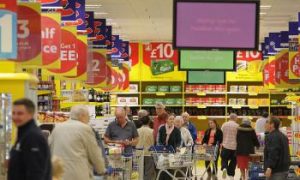 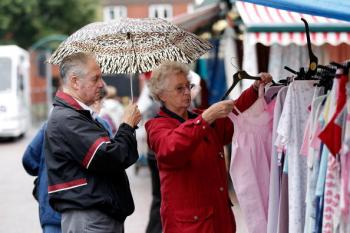 Shoppers must save for a rainy day, again. These bargains hunters were at Bolton Market on August 17, 2010 when figures for the UK inflation rate had slowed. The Office for National Statistics stated on Tuesday that VAT (which has gone up to 20%) and fuel (which hit a record high of Â£1.27 per litre on average in January) were the main factors for the present increase. (Photo by Christopher Furlong/Getty Images)
US

The Governor of the Bank of England Mervyn King warned that inflation was likely to last into the next two or three years, following the publication of the latest data by the Office of National Statistics (ONS) on Tuesday.

The UK Consumer Prices Index (CPI) had risen from 3.7 to 4 per cent in January – its highest for three years – as the VAT hike kicked in.

The rise will put pressure on the Bank of England Monetary Policy Committee (MPC) to lift interest rates to fend off the accelerating inflation.

In a letter to the government, Mervyn King said that inflation was likely to rise to 5 per cent in coming months.

He said that inflation had been pushed up by the VAT rise, a recent rise in commodity prices, and the past weakness of the pound.

"The MPC's central judgement, under the assumption that Bank rate increases in line with market expectations, remains that inflation will fall back so that it is about as likely to be above the target as below it two to three years ahead," he wrote.

In a letter the Chancellor George Osborne accepted that commodity prices were one of the causes of inflation, but didn’t mention the VAT hike, which his government was responsible for.

According to the ONS, one of the main factors driving up inflation is the rising cost of fuel, which hit a record high of £1.27 per litre on average in January.

"Two of the main factors that had an impact on the January data are the increase in the standard rate of Value Added Tax (VAT) to 20 per cent and the continued increase in the price of crude oil," the ONS said in a statement.
The rising costs of transport, restaurants and hotels, furniture and alcohol also contributed to the rising inflation, said the ONS report.

The British Chambers of Commerce (BCC) believe that interest rates will probably have to rise later this year, but say that the MPC must not increase interest rates until the initial impact of government cuts has been absorbed.

David Kern, chief economist at the BCC, said in a statement: “The increase in inflation to 4 per cent was exactly as most analysts expected, and there was even some relief in the markets that the outcome was not worse. The present situation is uncomfortable for the MPC. But, in the face of higher taxes, increased utility bills, and surges in food and energy prices, it is still likely that consumer price inflation will increase towards 4.5 per cent before it stabilises.

“We believe that a premature hike in interest rates would make no difference to inflation in the short-term, but would put the recovery at risk. It would also make it more difficult for the government to implement measures aimed at cutting the deficit.”