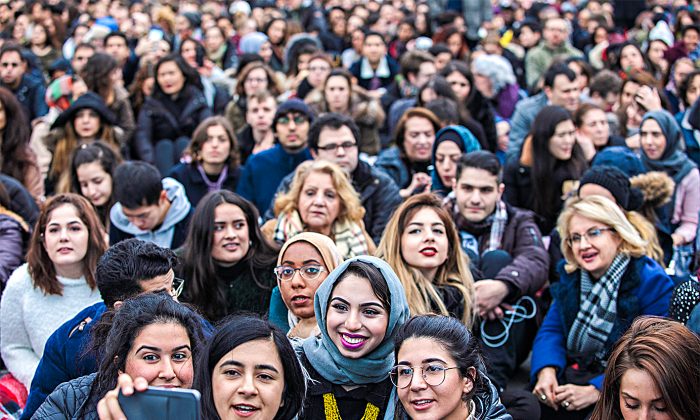 The United Kingdom has seen historically high immigration levels in recent years and has faced some challenges with integrating newcomers into British society. Discussing these problems, however, is near-taboo in some corners of society. (Jack Taylor/Getty Images)
International

LONDON—Like the United States, the United Kingdom is struggling to talk about immigration without the discussion turning into an exercise in name-calling.

“We’ve been unwilling to talk about some difficult issues around both migration and integration for fear of being labeled racist, or just not wanting to provoke a difficult conversation,” said Jill Rutter, director of strategy and relationships at British Future, a nonpartisan think tank focused on integration and immigration.

Rutter said that fear holds some people back from having an open and honest debate.

The debate on immigration hasn’t faded in the nine months since the nation was split 52 to 48 by the vote on Brexit, the British referendum on leaving the European Union. One reason that pundits failed to predict the pro-Brexit vote was that “leave” supporters were “shy voters,” afraid to voice their thoughts.

You could easily be labeled as racist. It all went crazy last year. The Brexit vote brought it all up.
— Catherine Newman, graphic designer

A Lord Ashcroft poll conducted in June found that one third of “leave” voters said immigration was their main motivation.

A report from British Future notes anxiety on both sides of the debate. One side fears being called “racist.” The other fears the immigration debate will be used as a vehicle to promote prejudice, said Rutter.

Gender roles in different communities is another topic people don’t want to speak openly about. “This reticence hasn’t served our migrant minorities and whole society very well,” said Rutter. “I think we need to find words to use, and to be more comfortable about talking through difficult issues.”

Many people Epoch Times spoke with on the streets of London—people who sit at various points on the pro- to anti-immigration debate spectrum—agreed that talking about the subject can be difficult.

Bottomley, who splits his time between the U.K. and France, where his Italian wife and children live, is all for open borders. He says that, like politics and religion, immigration is a “sensitive topic.”

Eddie Hoffmann, 39, a lawyer originally from Brazil, said: “I’m the most liberal person ever. … I don’t think anything that could divide people should exist. I’m totally against borders.”

He said that the Brexit and Trump votes were surprising because people showed their true views when they voted—views they hadn’t felt comfortable expressing openly, for fear of being labeled.

Eugene Gammell, 72, a former lecturer in electronics who lives in West London and is originally from Ireland, voted for Brexit.

“We still need immigration but people need to be checked. We need to control the levels of immigration,” he said, adding that he believes “most of [the people in] this country aren’t racist.”

Catherine Newman, 30, a graphic designer who lives in West London, sees both sides of the debate. “I’m somewhere in the middle. There needs to be some control. It’s good as long as people pay their way and don’t sponge on benefits,” she said.

“It’s a tricky subject, because you’ll end up offending somebody. You could easily be labeled as racist. It all went crazy last year. The Brexit vote brought it all up.”

In July 2015, British official Louise Casey was asked by then-Prime Minister David Cameron to study ways to bridge the divides between locals and migrants in the U.K.’s most isolated communities.

Published in December, her report on opportunity and integration, called the Casey Review, has been praised for not shying away from difficult conversations, but also criticized for focusing too much on Britain’s Muslim communities.

Casey is the government’s straight-talking integration czar who led the 2014–2015 government review into the Rotherham child sexual exploitation scandal. The scandal revealed that as many as 1,400 children were sexually abused in the town of Rotherham between 1997 and 2013, predominantly by men from Pakistani communities.

The Casey Review found that the U.K. government had not done enough to ensure integration kept up with “the pace and scale of immigration and population change.” The report recommended that the government fund more English language classes for isolated groups and require newcomers to take an “integration oath” on arrival, in order to close the gaps in communities. The measures would be part of a broader bid to tackle extremism.

“I think the Casey Review did have a lot of good points within it,” said Ted Cantle, professor and founder of the Institute of Community Cohesion. “It didn’t, however, set the levers to which integration would take place.”

He said the report focused on cultural practices of Muslim communities but overlooked the fact they are not homogenous.

Chuka Umunna, member of Parliament and chair of the all-party parliamentary group on social integration, welcomed the review.

A lack of integration of immigrants could leave “a vacuum for extremists and peddlers of hate to exploit,” he said.

In January, the parliamentary group released its own report on immigration and integration that urges Prime Minister Theresa May to call for a national-level integration strategy that would engage local governments.

Umunna writes in the report: “I believe that it is possible to craft a middle way between the laissez-faire multiculturalism favored by successive British governments—of different political persuasions—and the assimilationist politics of the French burkini ban. Too often, calls for greater integration are attacked, wrongly, as a rejection of multicultural Britain.”