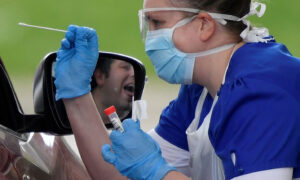 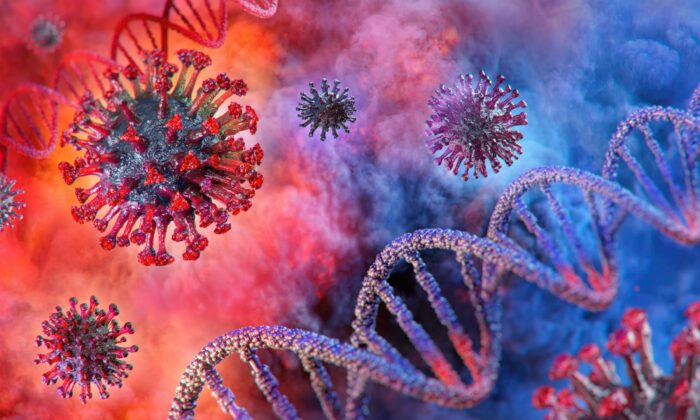 Over 4,000 variants of the CCP virus, also known as SARS-CoV-2 or the novel coronavirus, have been identified across the globe. (Corona Borealis Studio/Shutterstock)
UK

British health authorities have identified two more COVID-19 variants with a mutation that makes them resistant to vaccines.

Over 4,000 variants of the CCP (Chinese Communist Party) virus, also known as SARS-CoV-2 or the novel coronavirus, have been identified across the globe, most of which are not of concern, the Public Health England (PHE) said.

But the two variants identified by the UK’s New and Emerging Respiratory Virus Threats Advisory Group (NERVTAG) contain the E484K spike protein mutation, which has been found to result in weaker neutralisation by antibodies in laboratory experiments.

The E484K mutation is present on a number of variants found around the world, including the South African variant, which has been found to be more resistant to antibodies and reduces the efficacy of COVID-19 vaccines.

NERVTAG has named a variant identified in Liverpool last month a “variant under investigation” (VUI202102/01). It derived from a lineage called A.23, which was seen internationally, but the E484K mutation on this lineage has only been seen within the UK, PHE said.

It was first identified on Jan. 10 during an investigation into a cluster of five cases linked to members of staff from a hospital in Liverpool, PHE said, noting 55 cases of this variant had been found so far.

A “variant under investigation” can be designated a “variant of concern” after a risk assessment with the relevant expert committee.

The other recently identified variant, first found in Bristol and southwest England, has been designated as a “variant of concern” (VOC202102/02). Unlike the Liverpool variant, this strain derived from the variant first detected in southeast England in September 2020, which is commonly referred to the UK variant or the Kent variant.

PHE has so far identified 21 cases of this new variant, which has acquired the E484K mutation.

“While we expect that the vaccines will still prevent severe illness and deaths, we are taking public health action on clusters of variants with E484K to reduce the risk of spread in our population,” Dr. Susan Hopkins, director of COVID-19 strategic response at PHE, said in a statement.

UK Health Secretary Matt Hancock revealed on Feb. 2 that “mutations of concern” had been found in Bristol and Liverpool.

The government responded by expanding its door-to-door “surge testing” programme, initially intended to identify cases of the South African variant, to these two areas.

Hancock said the government was monitoring the efficacy of existing vaccines to see if the jabs need to be modified for new variants of the virus.

Tests previously conducted by Johnson & Johnson and Novavax showed that their vaccines were also significantly less effective against the South African variant.