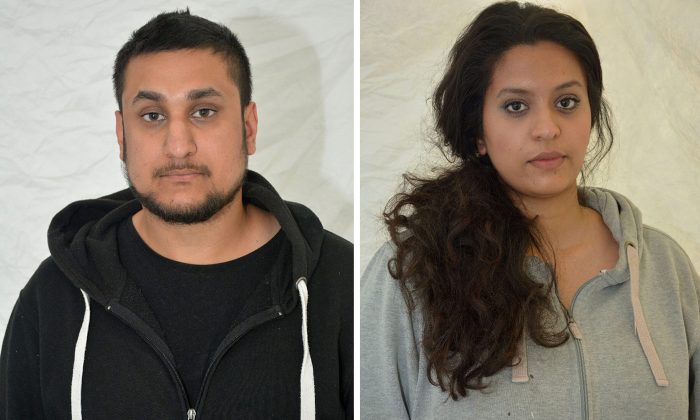 Mohammed Rehman (L) and his wife Sana Ahmed Khan, interested in helping Islamic State extremists, have been convicted of planning a large-scale bombing of civilian targets in London to mark the 10th anniversary of the July 7, 2005 attacks on the city's transit system. Rehman, 25, and his wife Ahmed Khan, 24, were found guilty Tuesday, Dec. 29, 2015, at the Old Bailey court. (Thames Valley Police via AP)
Special

LONDON—A husband and wife interested in helping Islamic State extremists have been convicted of planning a large-scale bombing of civilian targets in London to mark the 10th anniversary of the July 7, 2005, attacks on the city’s transit system.

Prosecutor Tony Badenoch said both were interested in extremist ideology. He said Rehman wanted to demonstrate his support for the Islamic State group and that his wife helped him by paying for chemicals purchased on eBay.

He said the couple, who lived in Reading, 40 miles (65 kilometers) west of London, had a “common interest” in taking violent action against civilians.

Prosecutors said Rehman was only a few days away from finishing work on a bomb capable of causing mass casualties when police moved in on May 28. They say he had been stockpiling a substantial amount of chemicals and had detonated a small practice device in his backyard.

Susan Hemming, head of the Crown Prosecution Service’s counter-terrorism division, said the couple had needed only a detonator to carry out an attack.

Authorities said he had used the name Silent Bomber to ask Twitter followers to help him choose a target: “Westfield shopping center or London underground? Any advice would be appreciated greatly,” he tweeted.

Rehman was also convicted of possessing an article to be used for terrorist purposes.

The pair will be sentenced later this week.