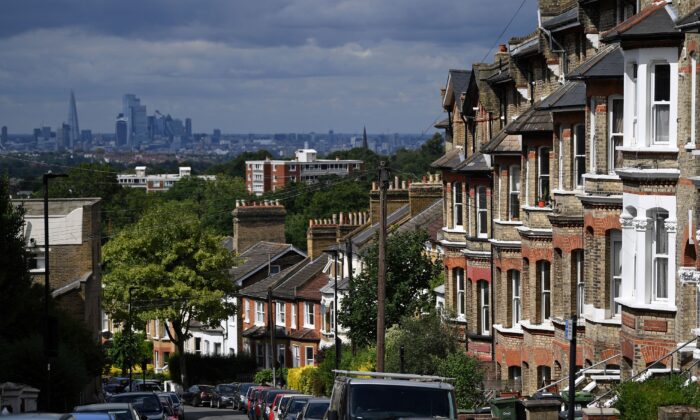 Rows of terraced houses and residential properties are pictured in south London, backdropped by the skyline of the City of London, on July 6, 2020. (Daniel Leal-Olivas/AFP via Getty Images)
UK

The percentage increase was nearly double the rate recorded in June, when the typical property value increased by 7.8 percent year-on-year. It is the highest annual inflation rate the UK has seen since May 2003.

The ONS said that the jump in annual inflation was mainly a result of a “base effect” from the falls in prices seen this time last year, as a result of changes in the stamp duty holiday.

A similar property tax holiday in Wales ended on June 30, 2021 and the equivalent holiday in Scotland ended on March 31, 2021.

A temporary “nil rate” tax threshold under the stamp duty holiday in England and Northern Ireland was reduced from July last year, before the holiday was completely phased out from October 2021. As a result, average UK house prices fell by £13,000 between June and July last year.

By contrast, house prices increased by £6,000 between the same months this year.

Sarah Coles, senior personal finance analyst at Hargreaves Lansdown, said the latest house price jump “is the result of changes to the stamp duty holiday last summer,” and “doesn’t affect the outlook for the market, which is facing real challenges.”

Gabriella Dickens, a senior UK economist at Pantheon Macroeconomics, said her firm expects house prices to fall outright in the second half of the year, “given the size of the rise in mortgage rates.”

But other experts are more optimistic.

Tom Bill, head of UK residential research at Knight Frank, said his firm does not expect prices to fall, though he admitted that rising mortgage rates “will ultimately curb the double-digit price growth seen over the last two years.”

Simon McCulloch, chief commercial and growth officer at conveyancer platform Smoove, said, “The dynamics of the UK property market continue to be determined to some extent by a lack of supply, which should prop up prices to a degree even in the event of a prolonged recession.”

Mike Scott, chief analyst at estate agency Yopa, said the firm expects house prices will continue to grow for the remainder of 2022, “though the annual rate of growth will quickly fall back from July’s 15.5 percent figure to something that’s in single figures.”